ADAS (advanced driver assistance systems) are rapidly being incorporated into automobiles and other vehicles, as products unveiled at January's North American International Auto Show in Detroit, Michigan made clear. Just a few short years ago, passive collision warning and active collision avoidance features were restricted to luxury models from luxury manufacturers. Now, even mass-market car suppliers are incorporating ADAS capabilities into their high-end and mainstream vehicles.

In order for ADAS to become completely pervasive, however, extending all the way into entry-level models, further cost reductions will be necessary, likely requiring reduced functionality. Such is the aspiration of Texas Instruments, which recently introduced the latest members of both its DRA7xx "Jacinto 6" infotainment processor and TDA2xx fuller-featured ADAS processor families (Figure 1). 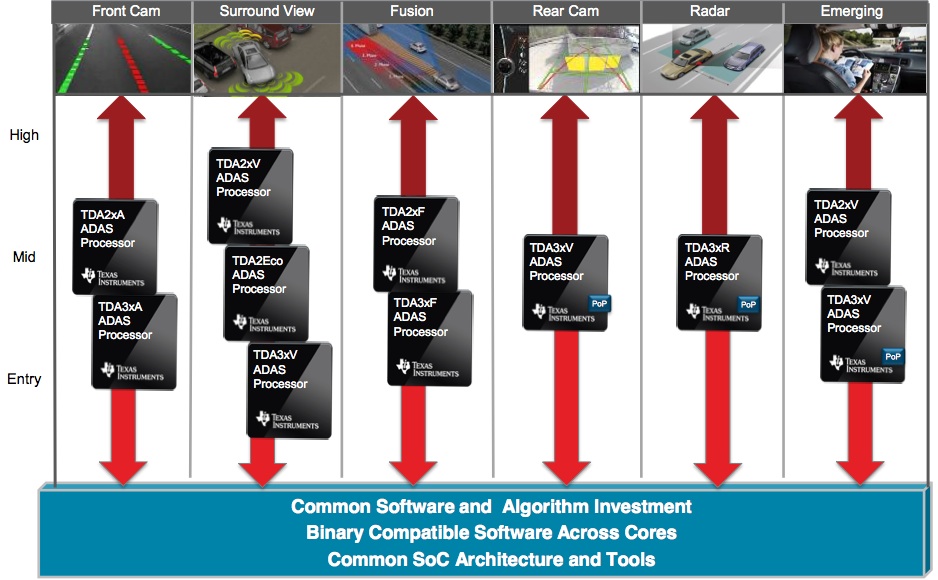 Differentiation between the DRA and TDA product lines, not to mention differentiation between specific products within a given line, is complicated by the fact that there's a high degree of core "building block" commonality among them (Figure 2). According to Brad Ballard, Texas Instruments' worldwide marketing and business development manager for audio and infotainment, DRA devices are generally intended for "passive" ADAS applications which might, for example, generate a tactile, visual and/or audible alarm when the driver is falling asleep or distracted, or if the vehicle is about to drift out of its lane of traffic or collide with another object. In contrast, "active" ADAS implementations (generally speaking the bailiwick of TDA devices) will temporarily take control of the vehicle in such cases; automatically steering the car, for example, or activating the brakes. 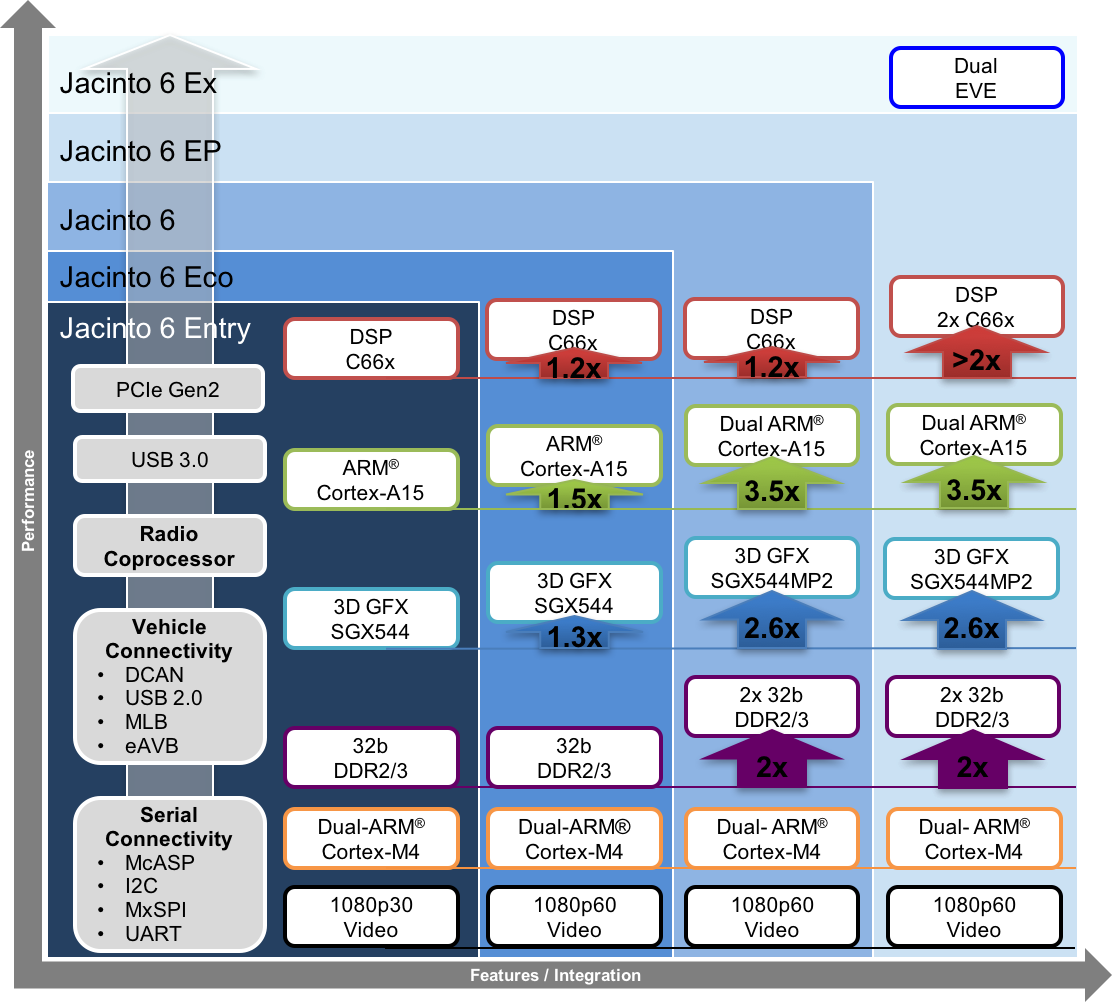 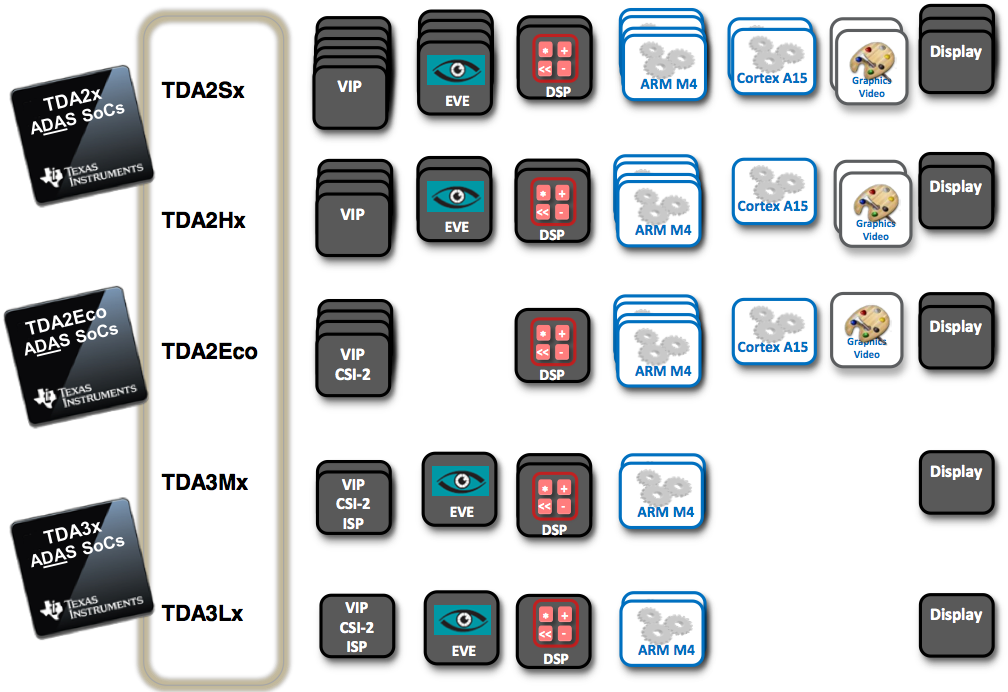 However, Ballard acknowledges that these are general guidelines, not hard and fast rules; "passive" ADAS subsystems are becoming increasingly active over time, even when run on DRA-class SoCs. And some differences in DRA and TDA chip capabilities aren’t necessarily visible in a high-level block diagram. TDA products tend to include features such as circuit redundancy, memory EDAC (error detection and correction) support, and both inter-core and supervisor-vs.-user mode code "firewalls" – all prerequisites for ASIL (automotive safety integrity level) qualification which, according to Ballard, is not necessary for DRA-targeting designs (therefore not included in DRA SoCs).

Speaking of block diagrams, let's first look at the newest TDA family member, the TDA2Eco (Figure 3). Like its siblings released in the fall of 2013, and unlike the more recent TDA3x family, it's based on ARM's Cortex-A15. It also embeds a C66x DSP, Vivante GCS320 (2D) and Imagination Technologies SGX544 (3D) graphics cores, and a video coprocessor, along with two dual Cortex-M4 CPU core clusters. Note, however, the absence in TDA2Eco of the EVE (embedded vision engine) cores found in higher-end TDA2x variants and in TDA3x devices. 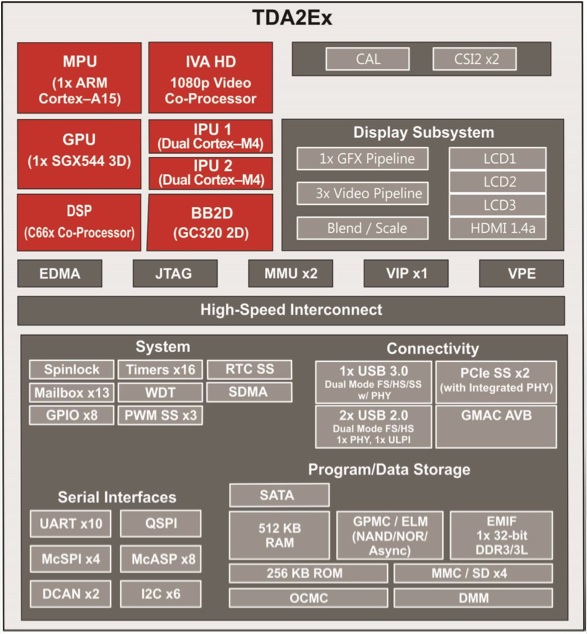 The lack of dedicated vision co-processor, coupled with decreases in Cortex-A15, DSP, graphics and other core counts compared with higher-end TDA2x family members, means that while TDA2Eco may be capable of surround-view stitching together the outputs of multiple cameras located around the vehicle and fed to it via its multiple video input ports, its ability to run real-time analytics and/or do other vision processing on the images captured by these cameras will be comparatively limited. Capabilities are, of course, dependent on a customer's particular algorithms' processing needs, including whether or not code execution can be partitioned across the multiple heterogeneous cores in the chip.

Then there's the more recently introduced DRA71x, aka "Jacinto 6 Entry" (Figure 4). In comparison to the next-tier DRA72x ("Jacinto 6 Eco") that was released in mid-2014, the feature set differences are minor. Only one of the multiple possible displays tethered to the DRA71x can, for example, be high definition in resolution. DRA71x devices also dispense with several peripherals found in DRA72x counterparts, such as a second USB 2.0 interface and the SATA 2 interface. And befitting the resulting reduced required pin count, DRA71x comes in a low-cost 625-ball 0.65 mm pitch BGA package measuring 17x17 mm, versus the 760-ball 0.8 mm pitch BGA package, 23x23 mm, used by the DRA72x. 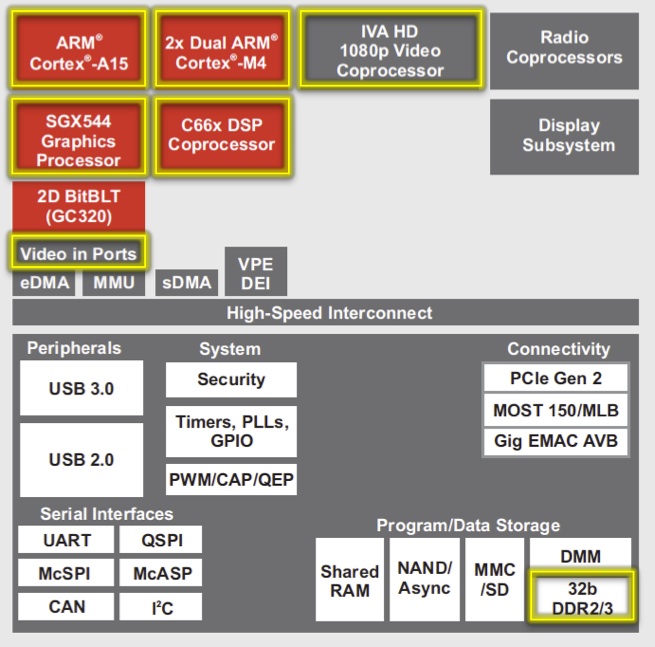 Given that DRA71x's target applications center on "display audio" multimedia streaming from smartphones via technologies like Apple's CarPlay and Google's Android Auto, and do not explicitly encompass computer vision, reduced CPU, GPU and other core clock speeds also play a role in the differentiation; the Cortex-A15 CPU and SGX544 GPU in the DRA71x run at 1 GHz and 400 MHz respectively, versus 1.5 GHz and 532 MHz in the DRA72x. Nevertheless, DRA71x devices do support up to two 720p video camera inputs, for rear view, front view and/or driver monitoring purposes. And both "Jacinto 6 Entry" and "Jacinto 6 Eco" also still provide notable feature set upgrades to their "Jacinto 5 Eco" predecessor, which Volkswagen recently announced it's using and which was based on the older ARM Cortex-A8 CPU and previous-generation graphics and DSP cores.

Texas Instruments' TDA2Eco SoC is now sampling and will ramp into production this year. DRA71x ("Jacinto 6 Entry"), conversely, is still in development, with sampling slated for later this year and production some time in 2017.