Hear the words "high volume DSP market" and you might automatically think of "mobile phones". And you'd be right; recent estimates peg quarterly worldwide mobile phone shipments approaching half a trillion units, with smartphones (which often contain multiple DSP cores) representing three-quarters of that amount. However, CEVA believes that in the not-too-distant future, alternative markets with similar cellular connectivity needs—wearables, connected vehicles, and a diversity of IoT devices—will in aggregate match (and eventually exceed) the mobile phone DSP market size (Figure 1). And in preparation, the company has expanded its IP core product line with the newly introduced CEVA-XC5 and CEVA-XC8 DSPs. 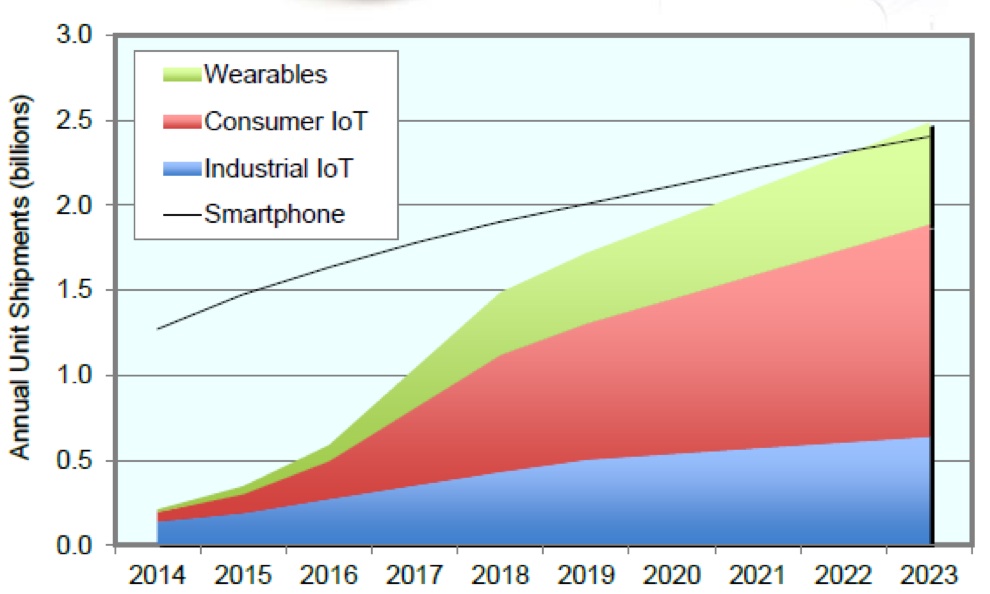 Figure 1. Today's dominant smartphone market will be matched (and eventually exceeded) in aggregate by wearable and IoT devices in the coming years, according to market analysts such as the Linley Group.

Both cores, which support scalar and vector integer capabilities, represent evolutions of the CEVA-XC323 that InsideDSP covered in late 2010. Like the XC323, the XC5/XC8 architecture is 8-way VLIW in nature. In comparing the block diagrams of the XC323 and the XC5, however, the primary difference you'll see is in the computation units: the lack of a fourth vector unit (VU) within each vector computation unit (VCU) of the XC5, along with the absence of a second VCU, both being the primary factors in its lower performance (Figure 2). However, CEVA's Business Development Director for Wireless and Wireline Communications, Emmanuel Gresset, strove to assure BDTI in a recent briefing that XC5 still delivers more than enough capability for its targeted LTE CAT-0 markets. And for higher end LTE CAT-1 needs, there's the XC8, which includes two CUs. 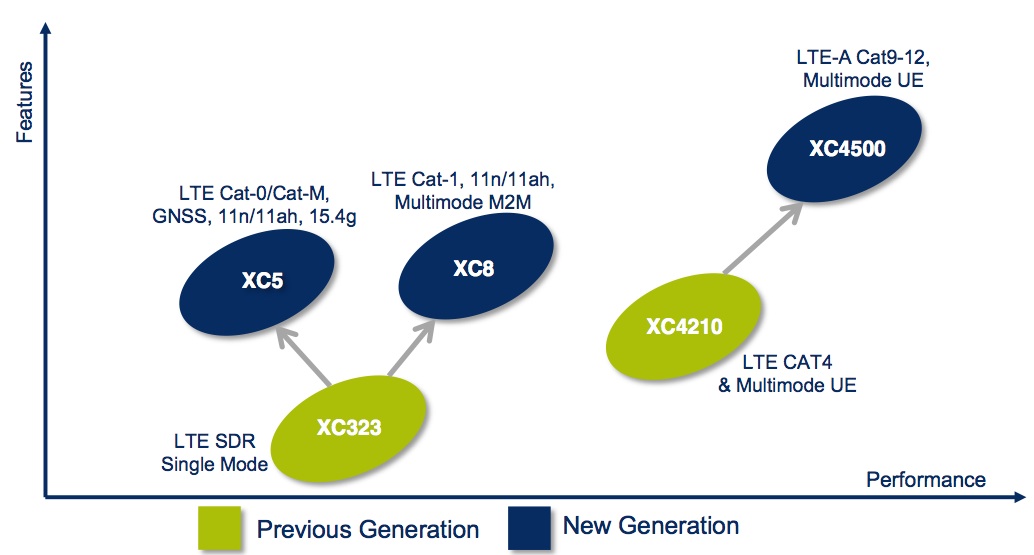 Figure 2. Fewer and less powerful vector computation units are key to the XC5’s claimed 40% cost reduction versus the XC323 predecessor (top). The XC8 offers higher performance at the cost of a minor die size increment (bottom).

The upside of the XC5's trimmed down computation unit (which still offers 16 MACs per VCU) is die size, therefore cost: an estimated 40% reduction versus the XC323, to be precise. The higher performance and otherwise more capable XC8 conversely is only 5% larger in silicon area than the XC323, according to Gresset, and the company therefore expects that in addition to its use in new markets, existing cellular base station customers will migrate to it from the XC323 going forward. Further XC5 and XC8 enhancements over the XC232, which a block diagram comparison doesn't reveal, are significant (Figure 3). And in combination with an enhanced second-generation on-core power-scaling unit (PSU) (previously seen on the XC4500, the latest member of the higher-end, floating point-capable XC4000 DSP core line), CEVA claims that the XC5 delivers up to 70% lower dynamic power consumption and a 20% reduction in required system memory versus its XC323 predecessor.

Figure 3. Additional architectural enhancements versus the XC323 also factor into the XC5 and XC8's performance-vs-area, power consumption and memory-usage improvements.

What's behind the application focus on LTE? For one thing, it's a matter of necessity (Figure 4). While 2G and 3G cellular data connections represented 99% of the total last year, this is forecast to change rapidly in the near future. Major carriers such as AT&T and Verizon in the United States will shortly be shutting down their 2G UMTS and 1xRTT networks in order to "re-farm" spectrum for LTE. 3G transceivers currently aren't optimal for wearables and IoT devices in terms of power consumption and cost, not to mention their spectrum inefficiency when considering the large numbers of wearable and IoT devices expected to be in use in the future. And with smartphones and other mobile communications devices wholly focused on LTE going forward, further innovation in 3G technology is not expected. 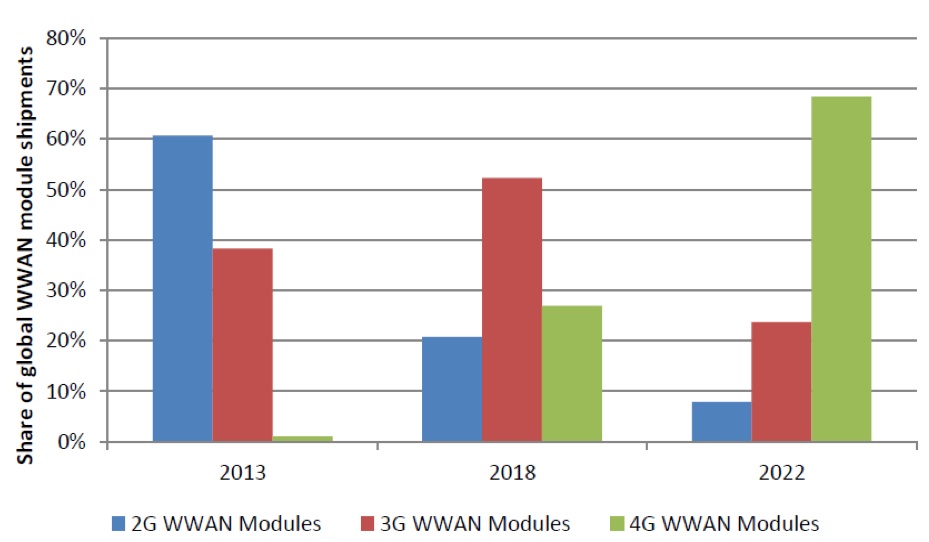 Figure 4. A rapid transition to 4G cellular data technology is forecast for coming years, both in traditional and emerging wireless communications markets.

LTE-M Category 1, which has been included in 3GPP specifications from LTE's initial unveiling and is therefore supported by existing deployments, specifies up to 10 Mbps bandwidth, which is desirable for video surveillance and other large data payload applications (Figure 5). However, it's overkill for smart utility meters and asset-tracking systems, for example, which also have more stringent power consumption and cost constraints for which the under-development 1 Mbps LTE-M Category 0 is more suitable. CEVA's Gresset also notes the necessity to support non-standard LTE deployments such as China's FDD-LTE, the frequent requirement to also comprehend conventional and mesh wireless and wired LAN technologies such as Wi-Fi, Bluetooth, ZigBee and PLC, and the equally common necessity to implement GPS location support. All of these factors, per Gresset, drive ever-higher core processing performance requirements, and motivate customer preference for "soft" versus fixed modem implementations.

Figure 5. DSPs' implementation flexibility versus hard-wired single-mode core alternatives enables them to support the multiple standards and functions demanded by target applications ("opt"="option" in the table).

Initial XC5 and XC8 licensees' SoC designs are underway, according to CEVA, with first silicon from the company's lead customer anticipated in the second half of next year. Both cores are now available for general licensing; additionally, CEVA offers a broad software portfolio including multi-mode communication libraries for protocols such as GSM, HSPA, TD-SCDMA, FD/TD LTE, LTE-A, and 802.11n/ah/ac, which the company claims have already been deployed in volume by numerous tier-1 customers. Each software package includes optimized and validated kernel blocks for optimal PHY performance on the target core, along with documented source code and algorithms. Also available from CEVA is a real-time operating system; the company's development partners supply additional LTE protocol stacks.

The CEVA-XC5 and XC8 represent intriguing extensions to a widely used 4G cellular processor family, reflective of evolving market requirements with respect to performance, power consumption, cost and other factors. Going forward, it'll be interesting to see both how quickly (if at all) the target markets reach volume, how their requirements continue to develop (and how well both CEVA's current and future products meet those requirements), and how well CEVA's offerings stack up against competitors' alternatives in these new application spaces.