In reading the InsideDSP newsletter every month, one observation that I hope you've made is that a diversity of processing options exist for implementing digital signal processing algorithms. The alternatives include GPUs, FPGAs, conventional CPUs, and standalone DSPs, along with DSP cores embedded alongside CPUs and other function blocks in highly integrated SoCs. And in recent years, you can also add microcontrollers (MCUs) to the list; while they don't typically include a standalone embedded DSP core, they can instead incorporate instruction set enhancements to efficiently tackle common digital signal processing functions. Such products are commonly referred to as DSCs (digital signal controllers).

Take, for example, Microchip Technologies' dsPIC product line, which was first announced in 2000, began sampling in 2002 and 2003 and entered volume production in 2004. As the name implies, it's derived from Microchip's PIC microcontroller products, specifically from the PIC24 family that (versus precursor PIC generations) delivers full 16-bit data and 24-bit instruction set support. As is typical for microcontrollers, dsPIC devices come in multiple variants that integrate various amounts of SRAM, EEPROM and flash memory, as well as offering on-board oscillators and a variety of on-chip peripherals: ADCs, comparators, PWMs, timers/counters, and multiple external interface ports. See here for BDTI's dsPIC benchmark testing results (PDF).

Given the dsPIC devices' digital signal processing focus, Microchip has enhanced them beyond PIC24 in several key areas. For one thing, the company has expanded PIC's Modified Harvard memory architecture (i.e. separate instruction and data memory buses, with the ability to access instruction memory as data), adding a second data memory bus. The ability to simultaneously access two operands in RAM, along with dual-port registers and other related architectural tweaks, in many cases enables efficient single-cycle arithmetic in parallel with next-instruction pre-fetch. Microchip spokespersons Alexis Alcott (Product Marketing Manager, MCU16 Division) and Bryan Kris (Principal Technical Staff Architect) were quick to point out this architectural capability as a counterbalance to the higher MIPS performance "paper" claims of some competitors' devices.

Other digital signal processing-focused silicon enhancements include dual 40-bit accumulators supporting rounding and saturation, which combine with the 16x16 fractional and integer multiplier to deliver single-cycle MAC (multiply-accumulate) capabilities. And these hardware features are utilized through ten DSP-tailored instructions, which augment the roughly 80 instructions supported by PIC24 (Table 1).

Although the dsPIC product line has been shipping for a decade now, it still has plenty of life to it. Reflective of this reality, Microchip published three separate new product releases within a two-week timespan in October, each focused on a different extension of the base dsPIC foundation, tailored for key dsPIC application segments:

First, on October 2, Microchip unveiled five new members of its dsPIC33 "GS" family, intended for use in digital power conversion systems (Figure 1). Befitting their application focus, GS devices integrate high-speed ADCs, high-resolution PWMs, and on-chip analog comparators with programmable hysteresis and rail-to-rail operation. All five new ICs are in volume production, with prices beginning at $1.54 (quantity 10,000). They run at up to 40 MIPS speeds and, in addition to lowering power consumption versus earlier dsPIC GS devices, are the first available in 20-pin SSOP and the even smaller (5x5 mm) 36-pin VTLA package (Table 2). 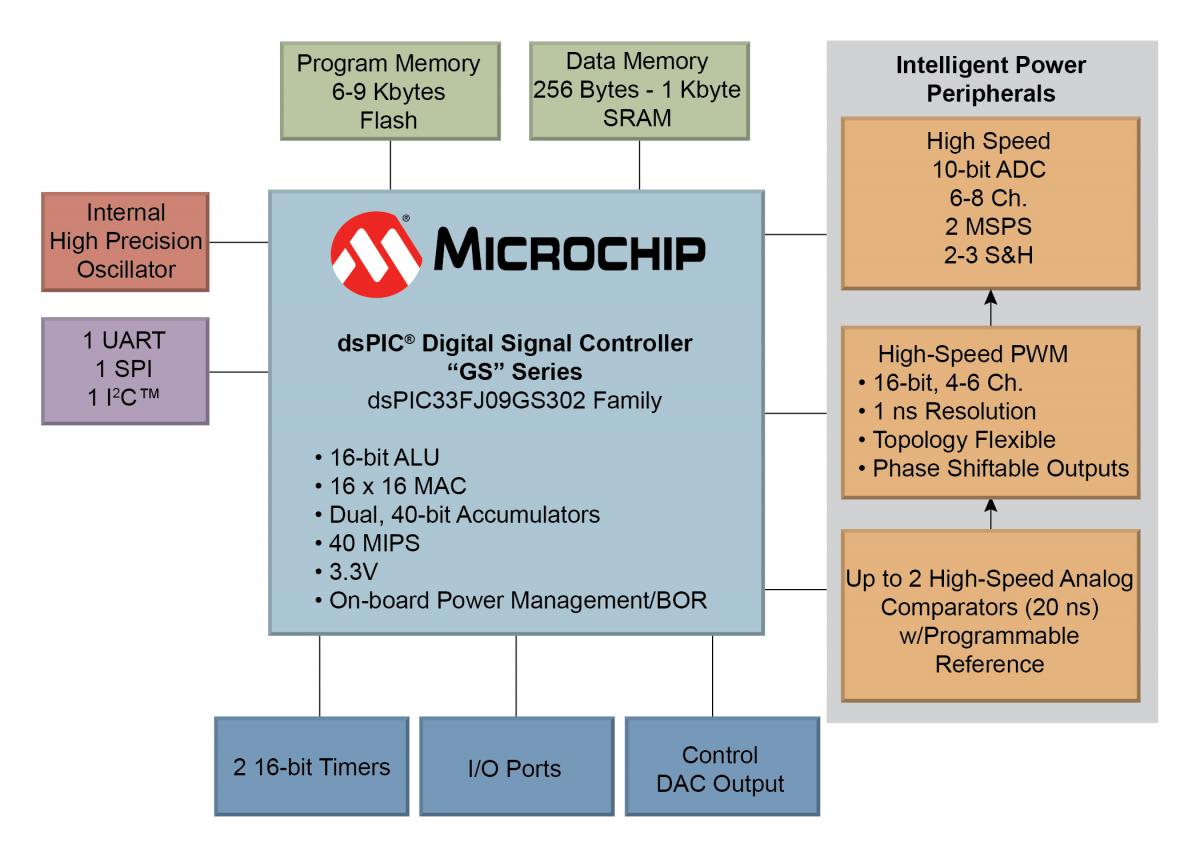 Table 2. Power consumption comparisons of the new dsPIC33FJ06GS202A versus the precursor dsPIC33FJ06GS202. According to Microchip, other GS A family members deliver similar improvements.

Less than two weeks later, the company turned its attention to the high end of the dsPIC product suite, this time focused on motor control applications. The newest dsPIC33E DSCs, which operate at up to 70 MIPS, integrate between 32 KBytes and 256 KBytes of flash memory (Figure 2). And commensurate with their target applications, they embed up to 6 PWM outputs, multiple op amps, and a charge time measurement unit for temperature and touch sensing interface support. Prices begin at $1.80 (quantity 10,000).  All of these new devices are already in volume production, and numerous packaging options are offered. 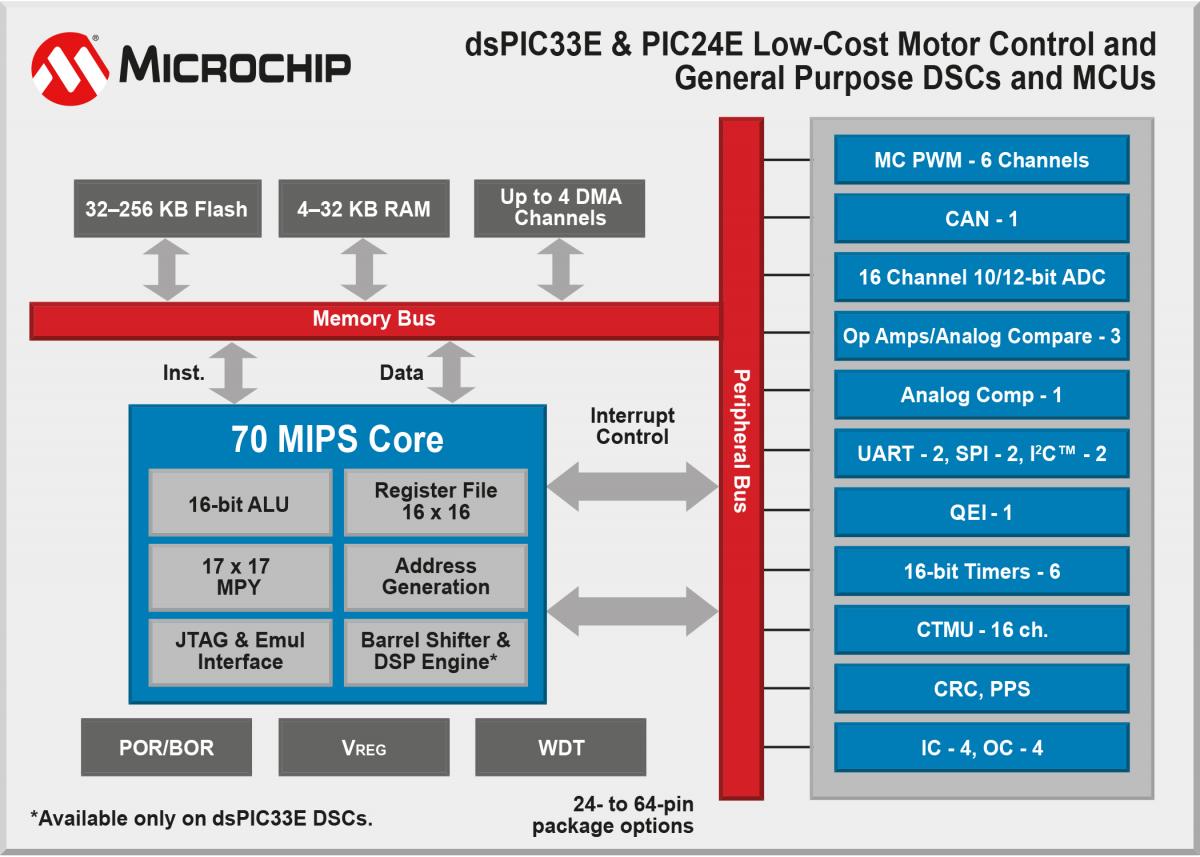 And one day later, Microchip wrapped up its October dsPIC rollout by redirecting its focus to the low end of the motor control space (power tools, toys, and the like), along with other applications such as consumer, medical and industrial designs. The six-member dsPIC33FJ32MC104 family runs at up to16 MIPS, embeds up to 32 KBytes of flash memory, and comes in a variety of package alternatives ranging from 18 to 44 pins (Figure 3). In comparing the dsPIC33FJ32MC104 family block diagram below to the already-discussed dsPIC33E one above, you'll notice (in addition to the already-mentioned clock speed and integrated memory differences) other differences befitting the high-end versus low-cost focus; fewer and lower performance peripherals, for example, as well as an absence of DMA controller support. Again, all six devices are in production, with pricing beginning at $1.71 (quantity 10,000). 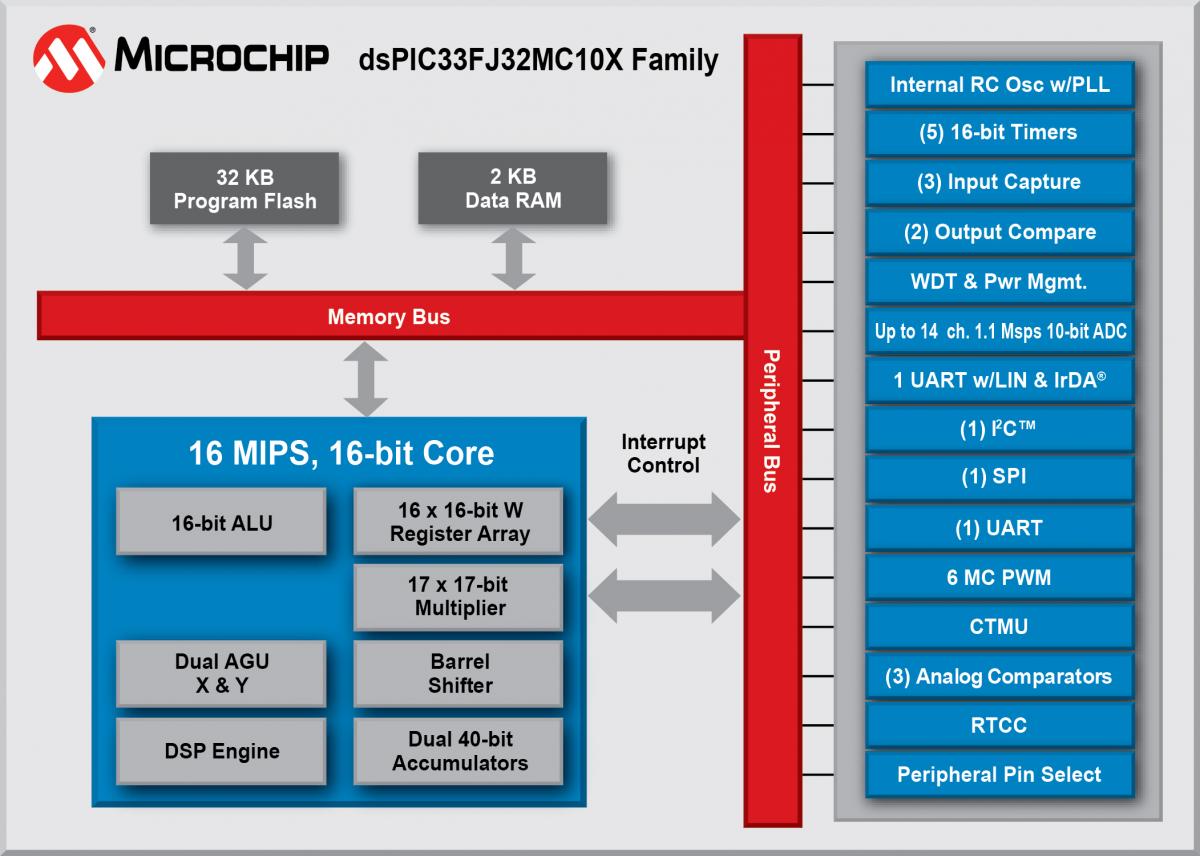