The hearing aid is a challenging digital signal processing application. The amount of processing horsepower required is formidable, both to filter out ambient noise and to amplify and otherwise enhance sounds that are of importance, and especially considering that the signal processing chain must be traversed within a few milliseconds in order that the user doesn't perceive lip sync loss or other visual-to-audible delays. But long battery life is equally essential; no hearing aid owner wants to be constantly swapping out power cells. And a big battery isn't the solution to the performance-versus-operating time quandary, either; no hearing aid owner wants others to know that he or she is using audio augmentation, although the overall "wearables" stigma has been somewhat reduced in recent times by the burgeoning popularity of Bluetooth headsets for cellphones.

ON Semiconductor has become a leading supplier of chips and associated software to the hearing aid industry via a series of acquisitions, according to Product Marketing Manager David Coode. The company's Ezairo product line, the most current members of which (the 7100 series) were introduced approximately one year ago, originated with Waterloo, Ontario (Canada)-based Dspfactory Ltd., which AMI Semiconductor acquired in 2004. ON Semiconductor subsequently acquired AMI in late 2007. Historical competitor Sound Design Technologies, spun out of Gennum in 2007, was similarly acquired by ON Semiconductor in mid-2010. Ezairo products are intended for tier-one hearing aid suppliers (the top six of which, according to Coode, comprise approximately 90% of the total market), which tend to do their own custom algorithm development. A second family or chips, originating from the Sound Design acquisition, come bundled with "turnkey" software and are therefore predominantly used by tier-two companies with fewer in-house development resources.

ON Semiconductor forecasts steady growth prospects for the hearing aid industry (Figure 1). In part, this growth is due to the increased acceptance of in-the-ear (ITE) devices, which can overcome the reluctance of potential users who might have previously been put off by behind-the-ear (BTE) designs. The total potential-user pool is also expanding, driven both by aging populations in existing markets and increasing disposable income in emerging markets. Plus, for the aged and young alike, according to Coode, hearing damage is unfortunately an increasingly common phenomenon; exposure to loud concerts and portable audio players are both notable factors, as are the side effects of diabetes and smoking. 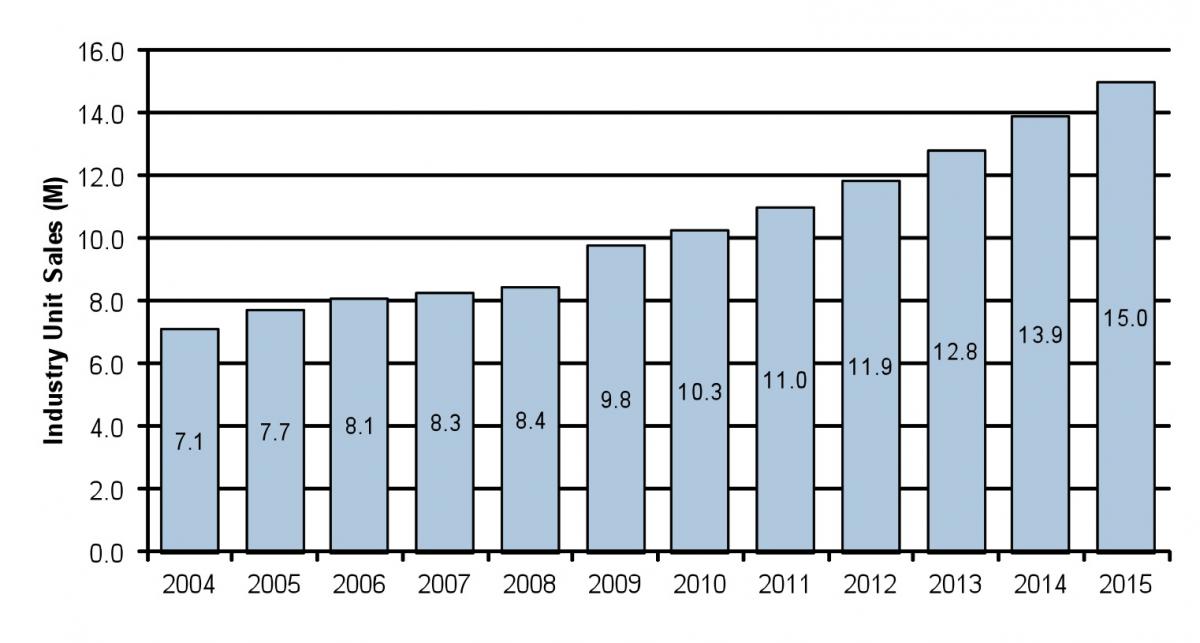 Figure 1. Aging populations, increased disposable incomes in emerging markets, and degradation due to both loud-sound exposure and health side effects are all factors fueling worldwide hearing aid market growth, according to ON Semiconductor.

Traditional BTE hearing aids contain multiple subsystems, beginning with the processor and its associated program and data memory, plus a number of passives, in a hybrid multi-chip-module (MCM) package (Figure 2). You'll also find a speaker and multiple microphones, potentiometers and switches, and the obligatory battery. BTE designs currently constitute approximately 75% of the market, according to Coode, but most of the future market growth will come from more compact, therefore aesthetic, ITE types. Their smaller size requires greater semiconductor integration and even greater attention to power consumption, given their smaller batteries. Buttons and volume sliders are no longer feasible with ITE designs, necessitating auto-adaptation of volume and other hearing aid operating parameters. 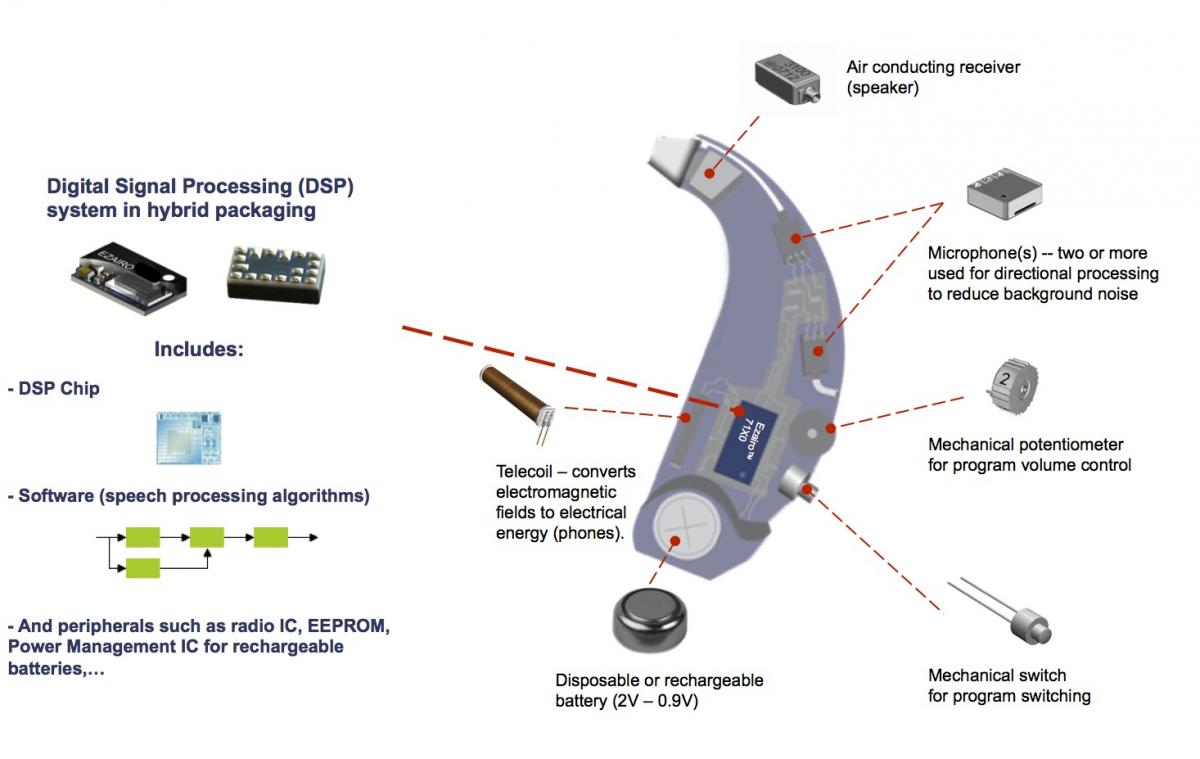 An inspection of the Ezairo 7100 block diagram shows how ON Semiconductor strives to address seemingly contradictory performance-vs-power consumption application requirements via a heterogeneous-processing SoC architecture (Figure 3). An ARM Cortex-M3 CPU core handles overall system management, assisted by multiple processor cores for various audio tasks. Highest DSP flexibility is delivered by the 24-bit "CFX" DSP, derived from the Philips-licensed CoolFlux CF6 architecture. Even more silicon- and energy-efficient, but less flexible, is the configurable "HEAR" accelerator block. And at the far end of the efficiency-versus-flexibility spectrum, the Ezario 7100 embeds a series of hard-wired filter engines. 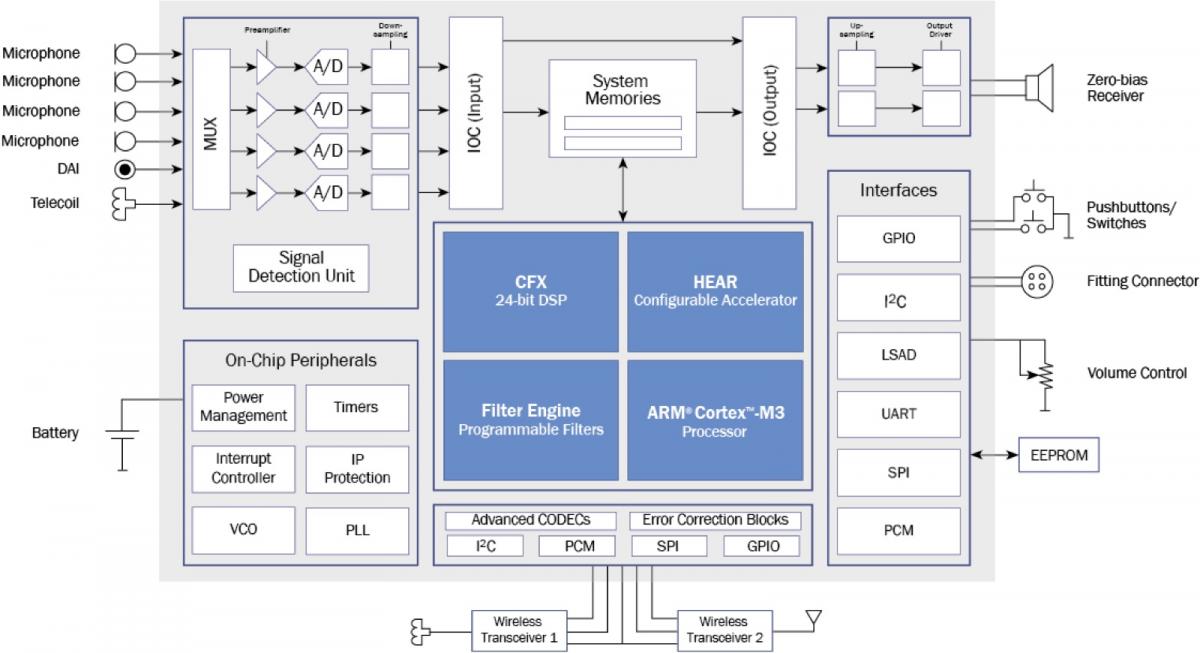 As Coode explained, "Things that never change will be hard-wired, while the remainder will be implemented in flexible software." The on-chip RAM is similarly distributed, 110 KBytes in aggregate size, split into six separate logical memory banks, some 24-bit (data memory), some 32-bit (CFX instruction memory) and some 48-bit (accumulators) in width, all intended to preserve audio sample fidelity through the processing pipeline. The overall intent of the architecture, he notes, is to do "the maximum possible amount of work per clock edge." And speaking of clocks, the Ezario 7100, which is fabricated in the 65 nm TSMC mixed signal process, is qualified to run at up to 10.24 MHz, although in reality the chip may operate faster still. At that rated speed, the absolute peak power consumption (4 MACs all operating in parallel, pulling from separate memory banks) is 5 mW at 1.25V. More typical peak power consumption is 1-2 mW, with average power draw of less than 1 mW.

How will hearing aid application requirements further evolve in the future? Whether in BTE or ITE form factor, the increasing prevalence of ear-to-ear coordination for beam forming noise reduction and sound amplification purposes is already driving increasing processing complexity. And although Coode notes that excessive round-trip latency precludes offload of hearing aid processing to wirelessly tethered mobile device (a wired design might be able to accomplish such processing offload, he notes, but wouldn't be accepted by consumers), a hearing aid can also serve as smartphone's headset, for example.

Rechargeable batteries in conjunction with overnight charging docks, versus today's zinc air disposables, will become increasingly prevalent in the future, according to Coode. And tier-two hearing aid suppliers, retailers, and health insurance providers are all pushing to remove the audiologist in-between seller and purchaser, an intermediary that has already largely disappeared outside the U.S. and other highly regulated markets. Direct sales to consumers would likely translate into lower equipment prices, further growing the overall market. But since, unlike the temporary annoyance of a poor vision prescription, incorrect hearing aid configuration can lead to permanent damage, so future equipment designs will need to be even more intelligent than they are today.