The April 2012 edition of InsideDSP covered Analog Devices' BF60x family, which as the then-published product roadmap indicated, was the successor to the high end of the BF5xx product range (Figure 1).

All four BF60x family members run at clock speeds of up to 500 MHz and integrate a dual Blackfin DSP cores; the BF608 and BF609 additionally embed a VGA- or HD-resolution Pipelined Vision Processor (PVP) core. A lithography progression from 130 nm for the BF561 precursor to 65nm for the new devices was key to the increased integration of the new devices.

Roughly two year later, the succession plan for the mid-range Blackfin line earlier hinted at has arrived in the form of the aggressively priced BF70x product family (Figure 2). 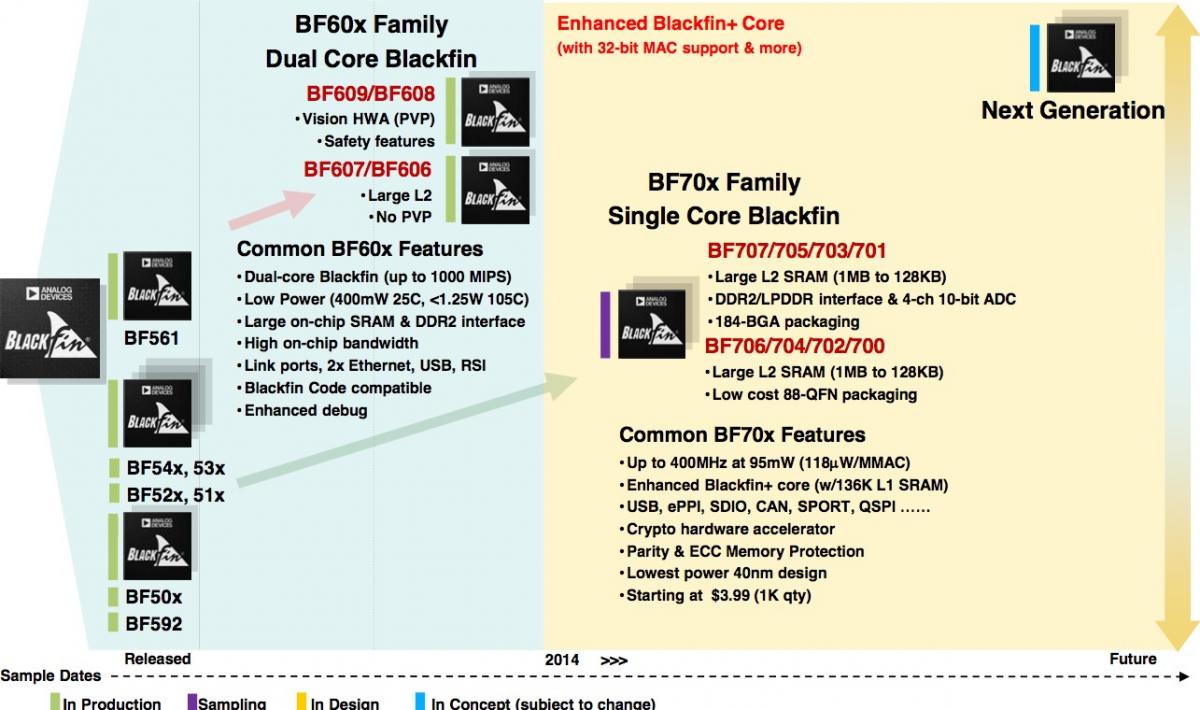 Figure 2. The BF70x family, currently consisting of eight products, is intended as the successor to Analog Devices' BF51x through BF54x product lines.

You'll find no PVP inside the new devices, which aren't intended for upper-echelon vision or other applications requiring maximum performance. There is also only a single Blackfin core in the BF70x product line, and clock speed options range from 100 MHz to 400 MHz. However, Analog Devices has architecturally enhanced the Blackfin core in the BF70x family, as well as further shrinking its manufacturing process to 40 nm. The combination delivers improved memory and peripheral integration, as well as significant claimed improvements in both absolute performance and performance/Watt metrics (Figure 3). 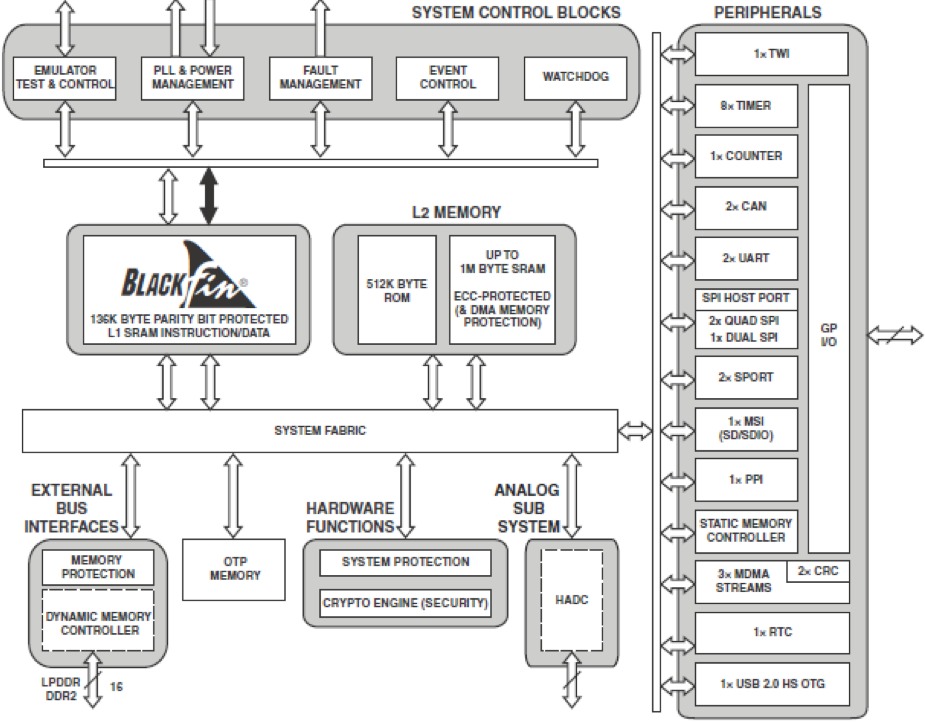 Figure 3. The BF70x family chip architecture showcases the substantial amount of silicon integration possible with a 40nm process, even on devices with prices starting at sub-$4.

Analog Devices also claims additional overall performance increases due to enhancements in the device's internal crossbar interconnect fabric and both the internal and external memory subsystems. Whereas BF60x devices embed 148 Kbytes of total L1 SRAM/cache per Blackfin core, the amount is slightly less on BF70x products; 64 Kbytes each of instruction and data SRAM/cache, plus 8 Kbytes of scratchpad memory, for 132 Kbytes total.

However, whereas BF60x products included 128 or 256 Kbytes of L2 SRAM, the L2 allocation ranges all the way up to 1 MByte on two of the eight BF70x variants. 512 Kbytes of ROM is included, too. And like their high-end BF60x siblings, four of the eight BF70x family members support a 16-bit external interface to LPDDR1 or DDR2 DRAM, for even more memory expandability. Notable, too, is the memory protection support the company has added this time; the L1 SRAM/cache is parity-augmented for error detection, with the L2 SRAM implementing full single-bit error detection and correction support. The result, Analog Devices claims, is an effective SRAM SER (soft error rate)-FIT (failure in time) metric significantly below 1 FIT, critical for the automotive, industrial, military and other applications the BF70x family targets.

Analog Devices is concerned not only about the inherent integrity of the information stored in memory, but also about securing it from unintended access. As such, the company has added on-chip cryptography accelerators to the BF70x family, with intended uses including fast secure system boot with authentication and decryption support. Analog Devices claims that its devices will securely load 512 Kbytes of boot code, complete with decryption and authentication, in less than 55 ms; an authentication-only option is also available. More generally, BF70x devices support memory-based encryption and decryption for high performance run-time security.

Additional on-chip security facilities include ciphers for AES128 through 256, DES and 3DES, for hash functions such as SHA-1 and SHA-2 (224/256), public key processing acceleration, and a "true" random number generator. AES-128 decryption occurs at a 2.46 bit/cycle rate, while SHA-224 hash processing speeds along at 7.88 bits/cycle; a 224-bit elliptic curve digital signature algorithm) verification session takes 1.7 million cycles. And, as a glance at the product family block diagram shows, Analog Devices has included an abundance of other peripherals on-board the devices; the same four-of-eight family members that embed DRAM controllers also tout four-channel 12-bit ADCs, and bump up the SDIO/MMC/eMMC interface from four- to eight-bit support (Figure 4). 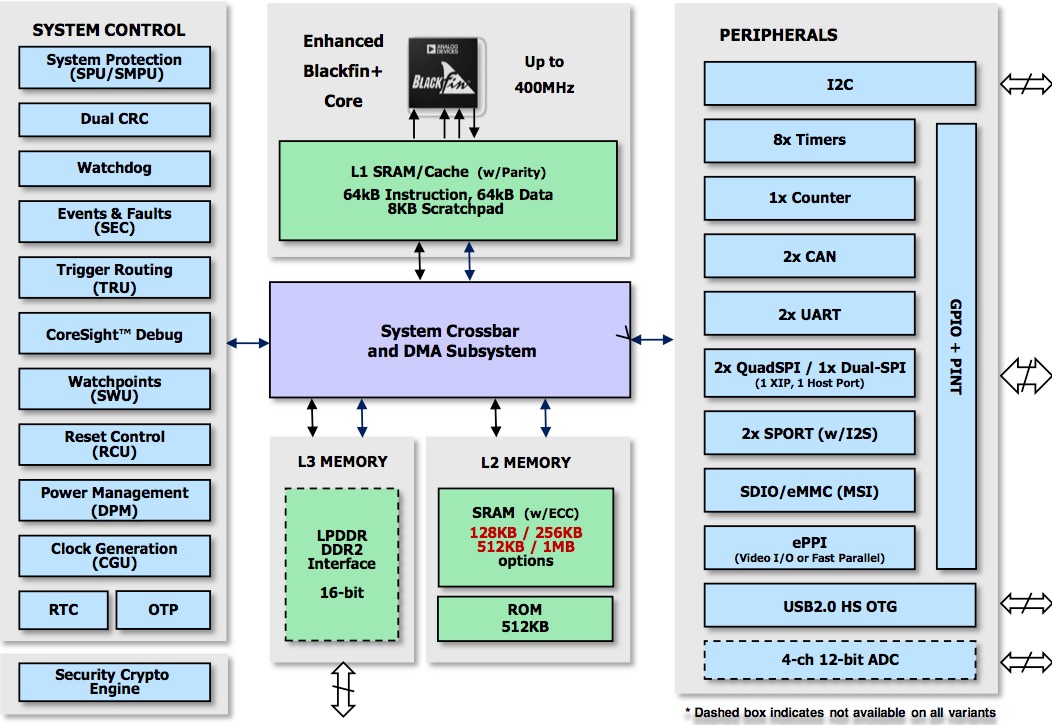 All of this silicon resource potential must come at quite a power consumption penalty, right? Not so, says Analog Devices' Lanfear, thanks in part to the inherently lower voltage and current requirements of the devices' 40 nm fabrication process. The company has also raised the power consumption bar, in comparison to BF5xx precursors, by intelligently clock- and power-gating various SoC subsystems in a fine-grained fashion, and in implementing additional idle states. "Typical" code running on the highest-available 400 MHz (i.e. 800 MMAC in 16-bit dual MAC fashion) product family speed bin results in only 95 mW of estimated power consumption; this translates to a 188 µW/MAC metric at 400 MHz.

Samples are currently available for the 400 MHz, 1 MB SRAM ADSP-BF706 (QFN package) and ADSP-BF707 (BGA packages) products, with full production of the BF70x family beginning in the third quarter of 2015. Also now available is BF70x support in Analog Devices' Eclipse-based CrossCore Embedded Studio 1.1.0 tool chain. The 400 MHz BF707-based EZKIT development board is also available, as is the $150 ICE-1000 emulator; the EZ-KIT-Lite combines the software and both pieces of hardware for $299, and additional system boards and USB-based JTAG emulator options are in development (Figure 5). 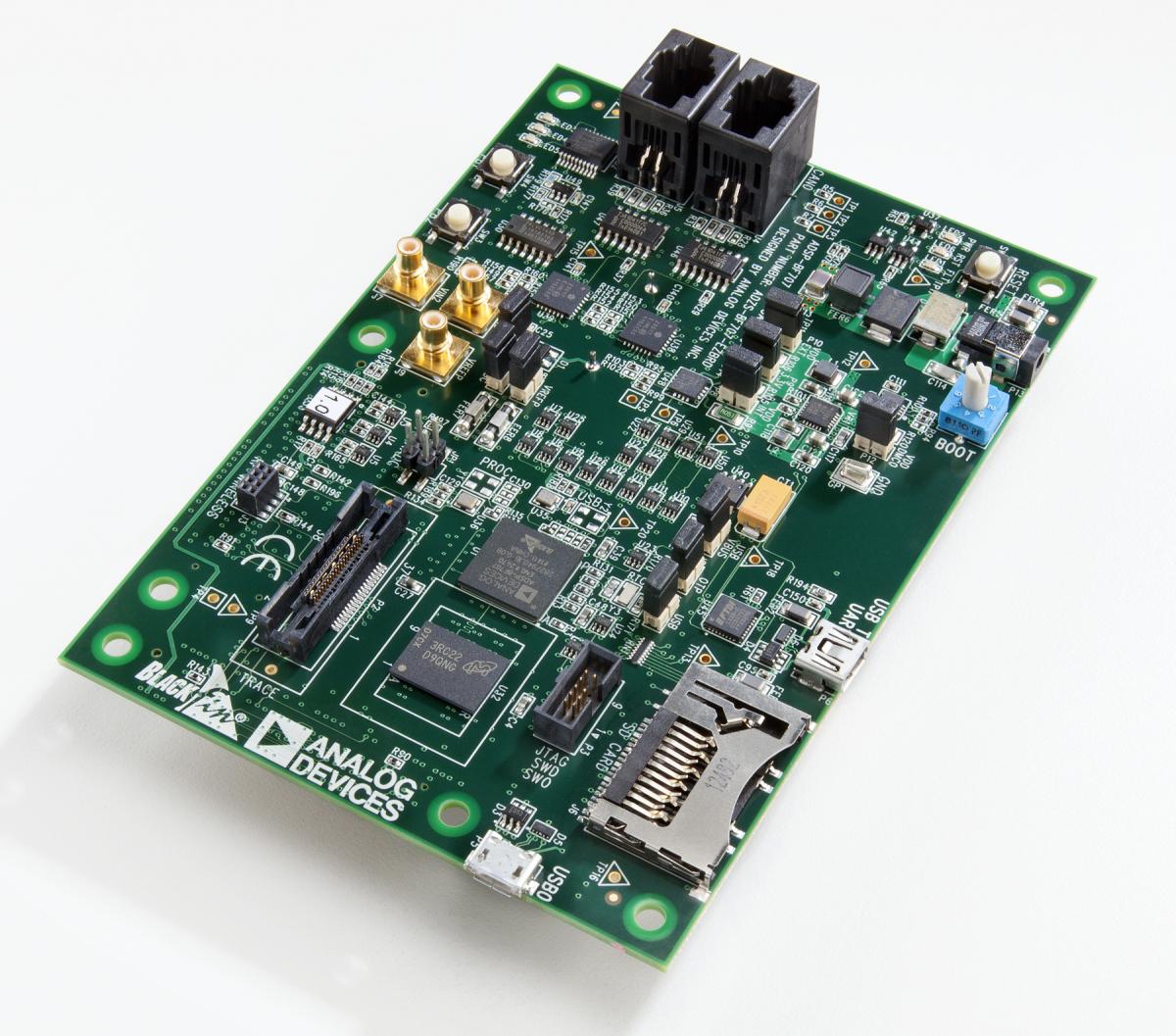 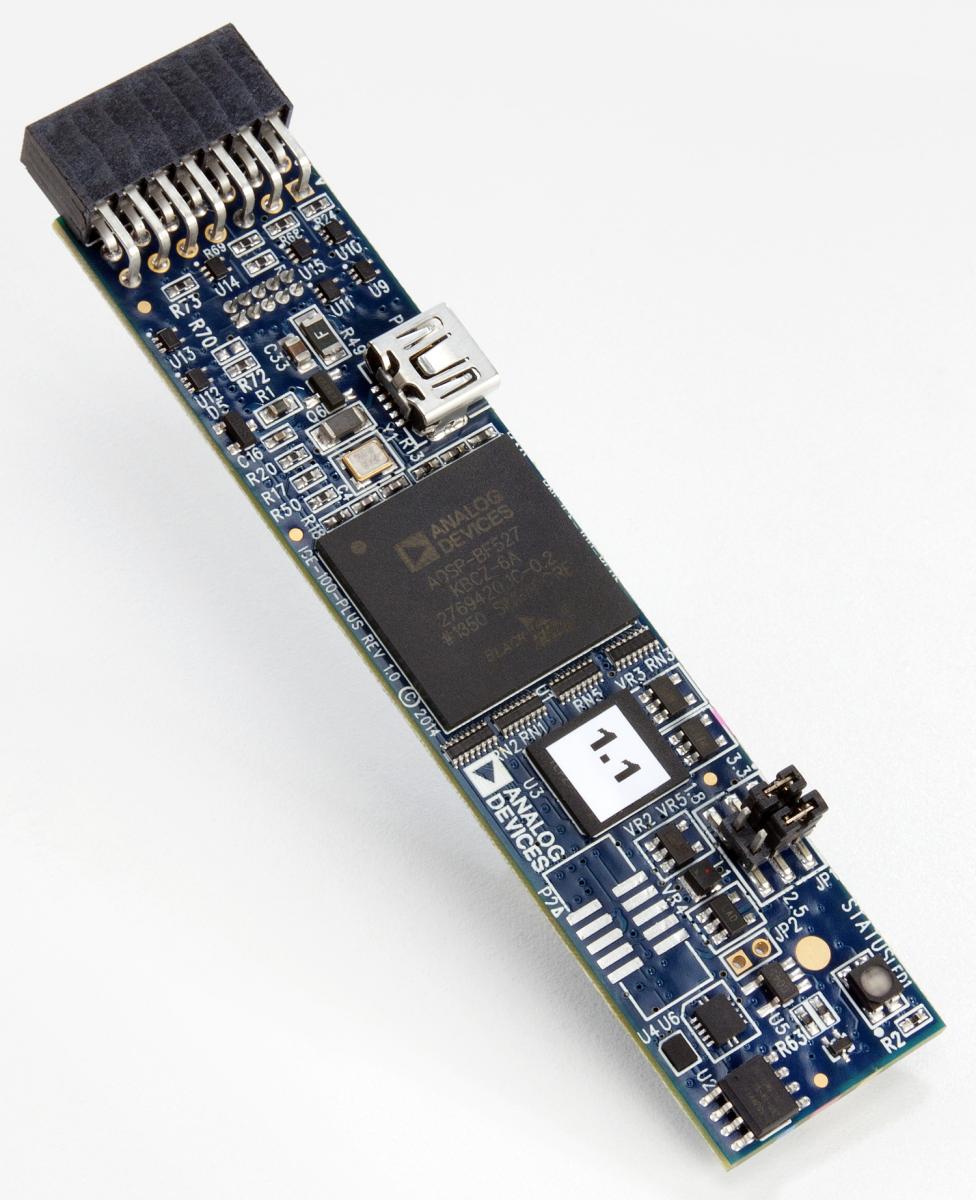 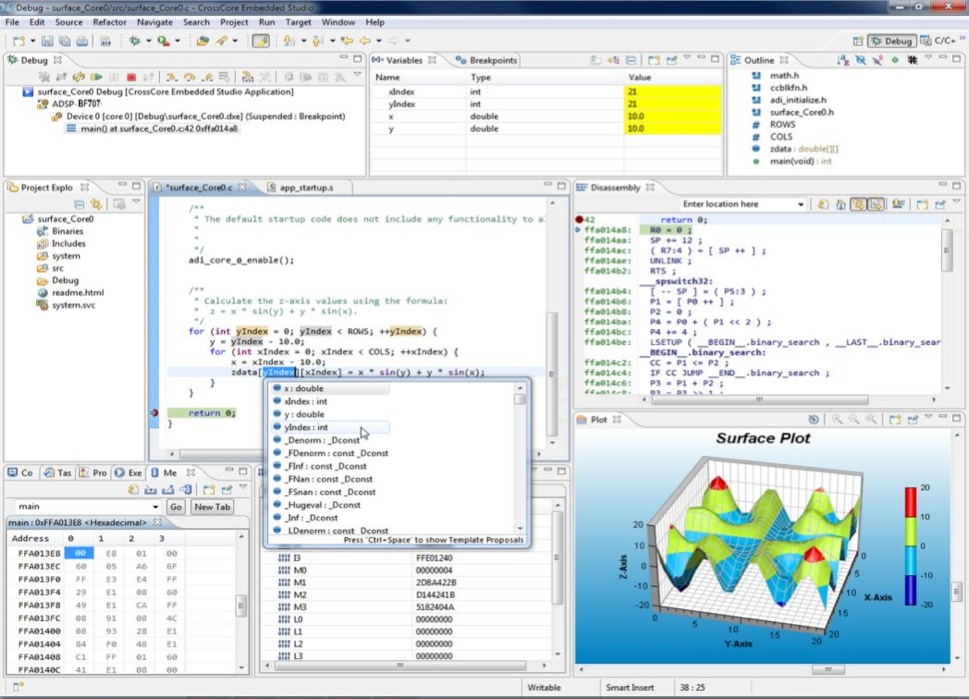 License-free software modules include the company's Image Processing Toolbox, containing hundreds of vision processing primitives, still image and video encode and decode routines, and numerous audio encoders, decoders, and post-processing algorithms. I'll close with a rarity: the company has provided a detailed table of the features offered in each of the eight BF70x family members, along with 1K unit pricing for each variant in both commercial and industrial temperature operating range options (Table 1). 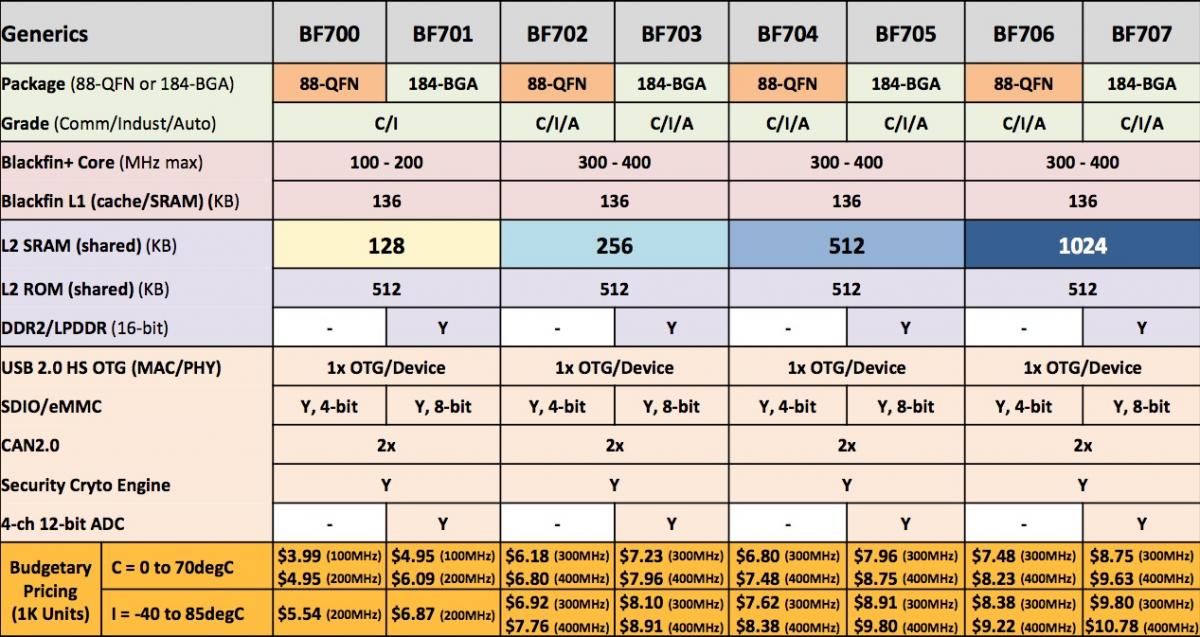 Table 1. Analog Devices takes the rare and welcome step of not only providing detailed information that differentiates between various BF70x product family members, but also publishing 1K unit pricing on each of them.

Kudos to Analog Devices for such candor. And kudos to the company as well for the architecture and process advancement that the BF70x family delivers over BF5xx predecessors. DSP competitors such as Texas Instruments aren't standing still, of course, and ARM's army of licensees can't be ignored, either. But assuming Analog Devices delivers on its promises, BF70x devices seem well positioned to enable the company to retain the mid-range designs that it had previously secured in markets such as intelligent lighting and occupancy detection, portable audio recorders and effects processors, industrial imaging, automotive, communications and military/aerospace, and health care…and potentially to grow Analog Devices' DSP business as well.