Those of you familiar with Analog Devices' longstanding presence in the DSP market, via the company's Blackfin, SHARC and TigerSHARC product lines, can be forgiven for assuming that SigmaDSP is yet another family of general-purpose DSPs (Figure 1). 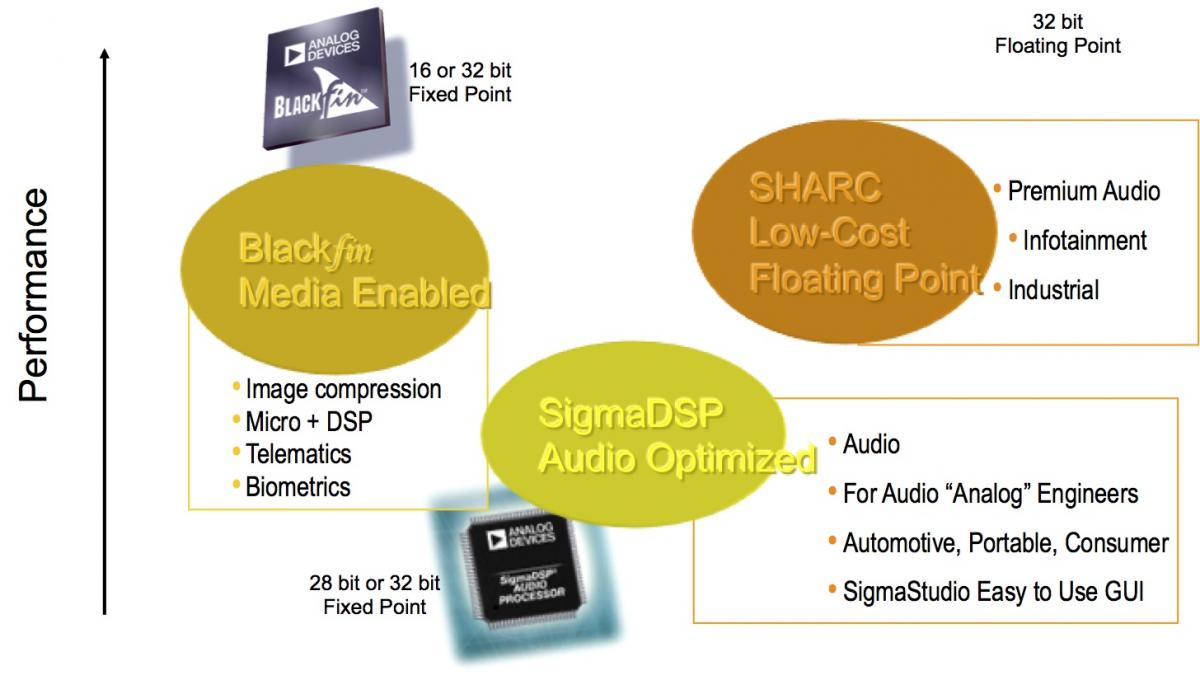 SigmaDSP does implement audio-centric digital signal processing functions, which explains the "DSP" in the name. Unlike a conventional DSP, however, SigmaDSP's programming model is function block-based; you don't feed it generic C (or any other conventional language) source code. Instead, you use the company's SigmaStudio toolset to graphically combine (and customize the parameters of) various library functions, which the toolset's compiler then turns into code for the SigmaDSP device (Figure 2). 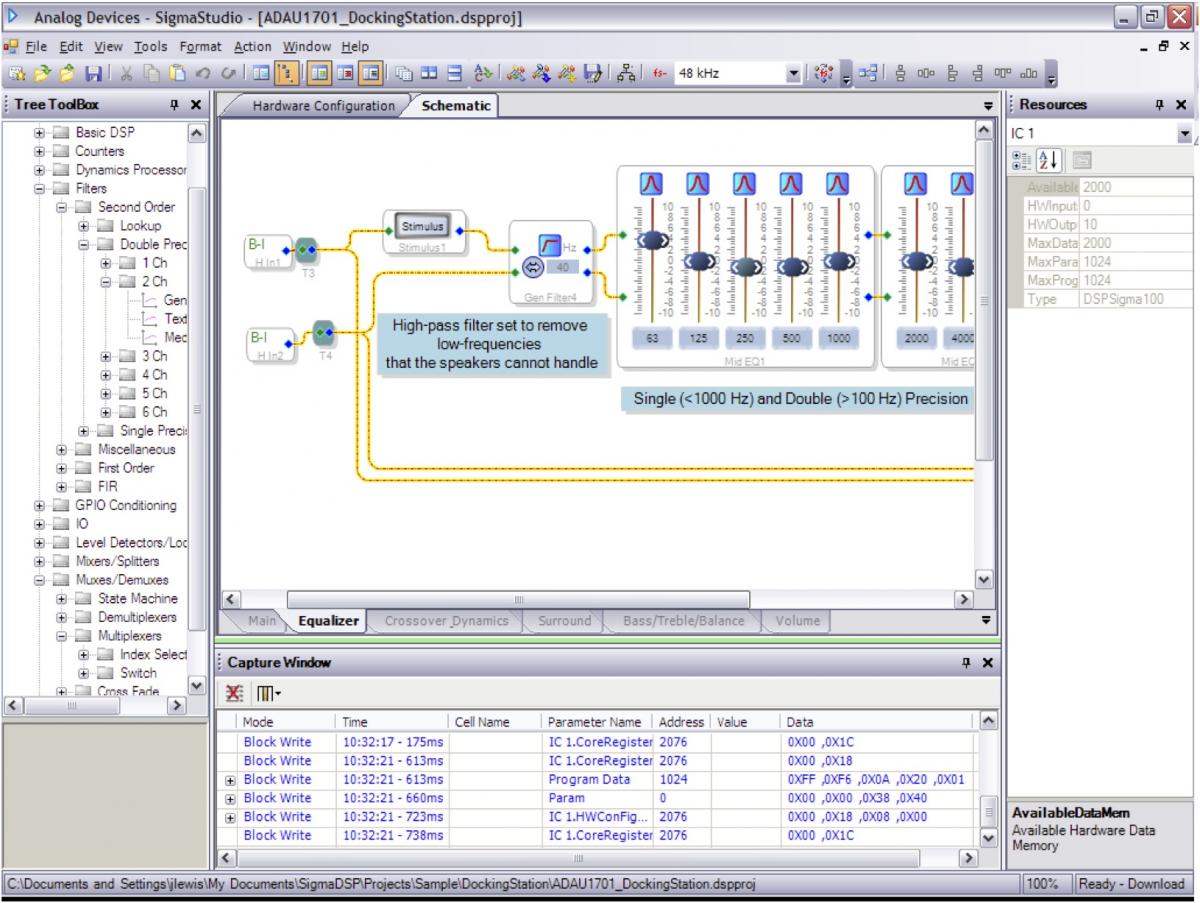 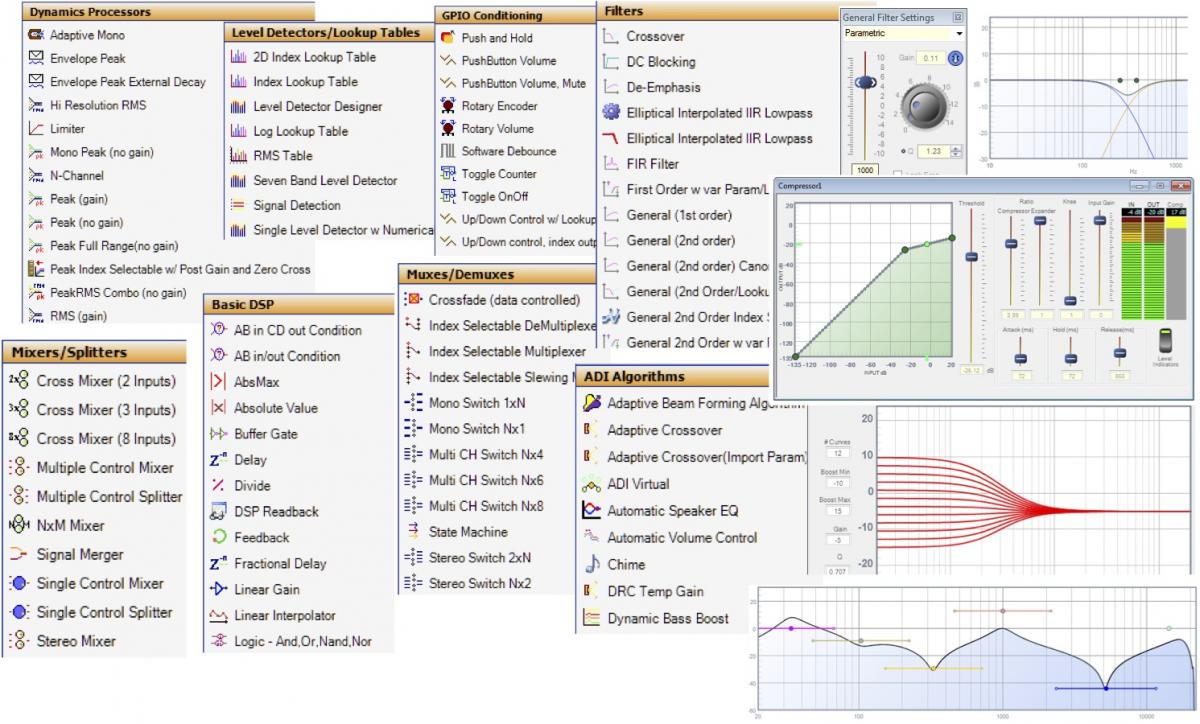 SigmaDSP, the first generation of which dates from a decade ago, actually comes out of Analog Device's converter group, explaining the "Sigma" (referencing sigma delta conversion) in the name. As Audio Application Engineer Brett Gildersleeve explains, the company noticed that its automotive, consumer and other audio customers were combining standalone DSPs with ADCs (analog to digital converters), DACs (digital to analog converters), SRCs (sample rate converters) and other analog-centric ICs in their system designs. Thanks to Moore's Law-driven integration capabilities, the company saw the opportunity to provide those customers with a single-chip solution.

Successive SigmaDSP generations, leveraging both lithography progressions and application-tuned feature set optimizations, have delivered performance and power consumption improvements along with increasing amounts of on-chip memory and varying degrees and types of functional integration. For example, the third-generation SigmaDSP products that began shipping in 2009 supported branching, looping and subroutines, versus the linear incremental program counter found in first- and second-generation offerings. The resulting potential program memory savings is counterbalanced by non-deterministic code execution characteristics, with varying processing load depending on branching, but the compiler prevents the peak load from exceeding a pre-defined limit to ensure there's no risk of dropped audio samples (as might be the case with a conventional interrupt-driven architecture). 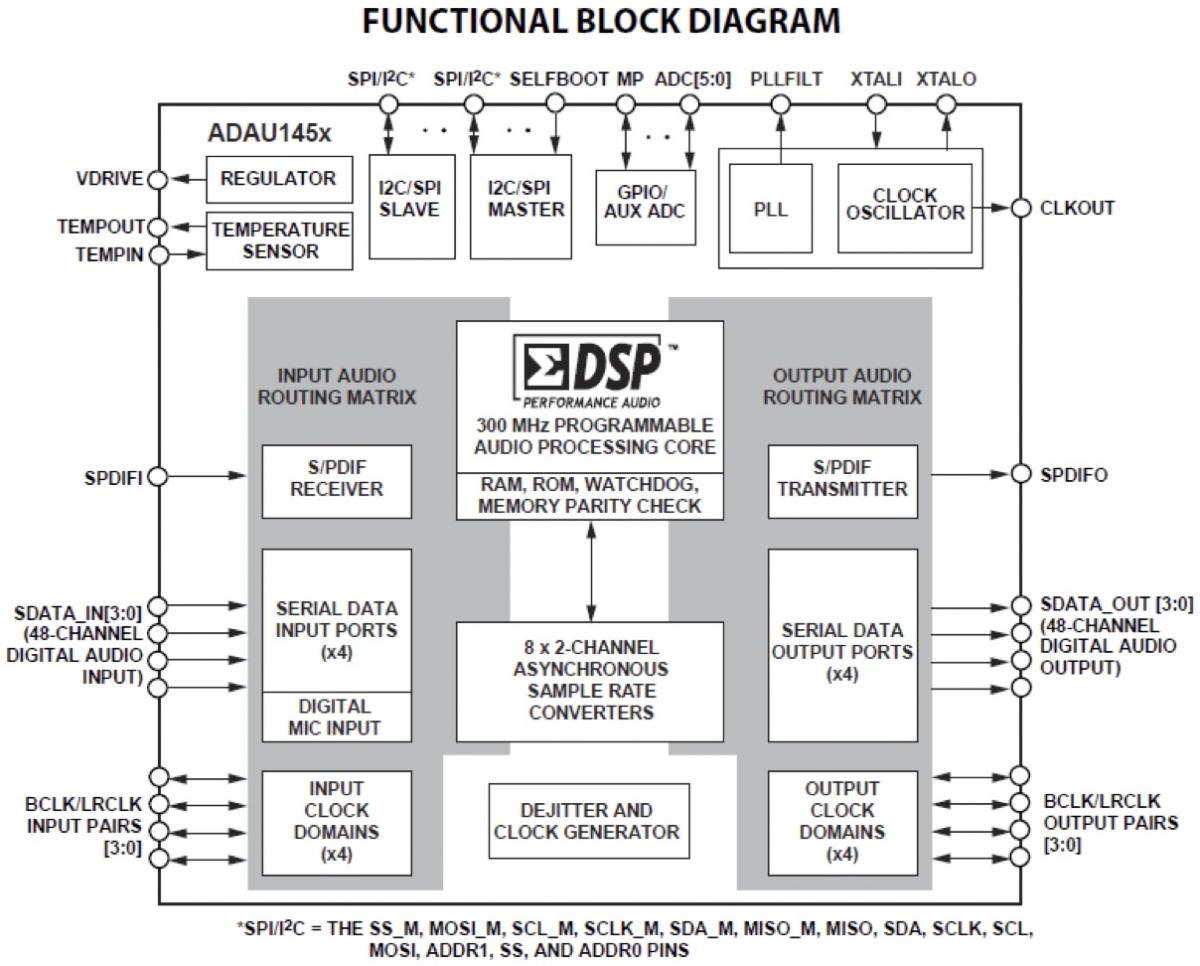 Other fourth-generation SigmaDSP family members, to arrive shortly, will be differentiated by the amounts of on-chip program and data RAM, along with other features. The ADAU1452 is fabricated using a 65 nm process, which may not sound too impressive at first glance, considering that leading edge SoCs are now being built on 22 nm fabrication foundations. Consider, however, many SigmaDSP products' analog circuit-rich nature, which generally requires a more conservative process node. Consider also that prior-generation SigmaDSP products were built using a 180 nm process, and you might conclude that the fourth-generation fabrication upgrade would translate into faster clock speeds, lower power consumption, and increased on-chip circuitry. You'd be right on all counts (Figure 4). 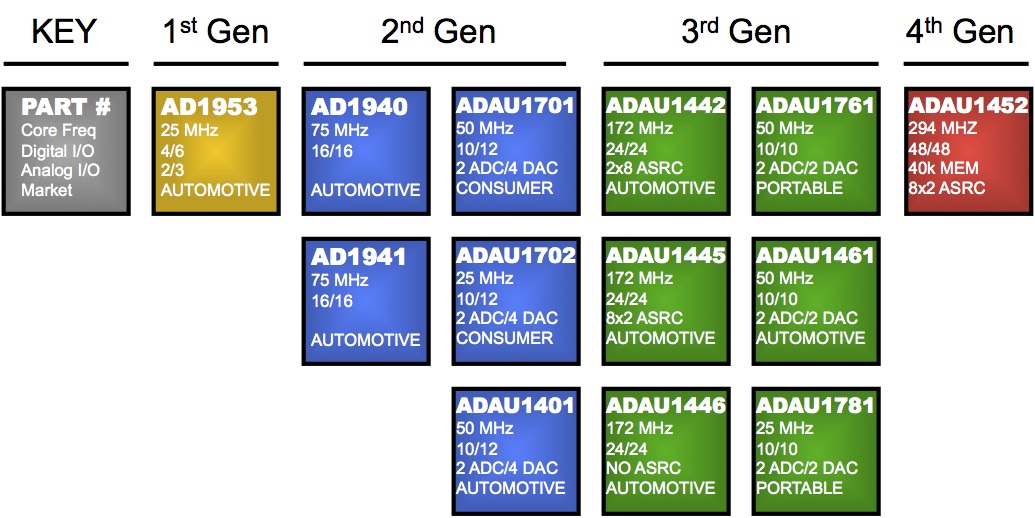 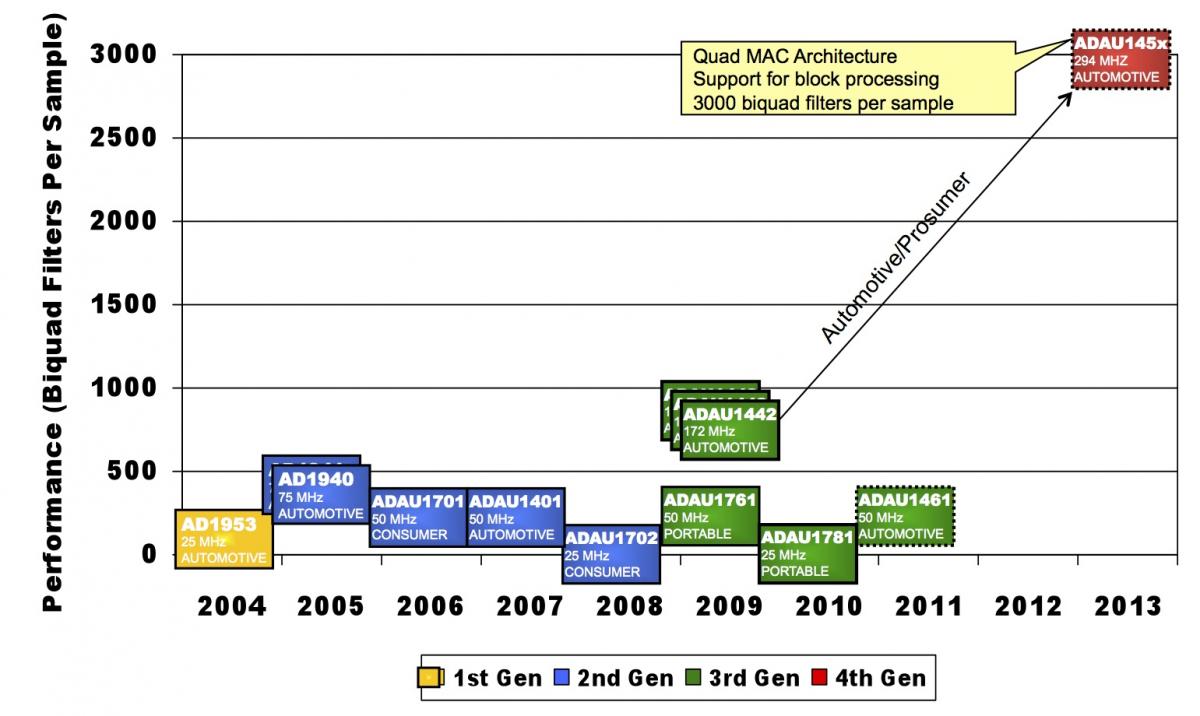 Figure 4. Each SigmaDSP generation has come in application-tailored feature set variants (top), and the company's fourth-generation family (with the ADAU1452 as its premier member) will extend this trend, along with delivering a notable performance up-tick (bottom).

First and foremost, the ADAU1452 runs at a 294.912 MHz clock rate, versus 172.032 MHz for the highest-speed third-generation SigmaDSP products. Equally, if not more importantly, Analog Devices has migrated from a single-MAC (multiply-accumulate unit) approach to a quad multiplier feeding a dual ALU (arithmetic logic unit). The result, according to Gildersleeve, is an average 2.8x performance increase across real-life customer code samples evaluated by the company. Similarly, the maximum "real life" power consumption is halved, from 960 mW to 480 mW (the latter at 1.2V), according to Analog Devices. And the product packaging also shrunk 60%, from a 100-lead 16x16 mm TQFP (thin quad flat pack) for third-generation SigmaDSP devices to a 72-lead 10x10 mm LFCSP (lead frame chip sale package) for the ADAU1452.

In spite of the newer product's pincount reduction, its digital I/O channel count has doubled, from 24 serial inputs and outputs to 48 of each (at 192 KHz peak sampling rates). Four PDM (pulse-density modulation) inputs support MEMS (micro-electro-mechanical systems) digital microphones, and are supplemented by S/PDIF (Sony/Philips digital interface format) I/O. Additional on-chip audio conversion resources include eight asynchronous SRCs, each with a conversion ratio range from 1:8 to 7.75:1 at a 139 dB dynamic range. More general-purpose input/output facilities include six 10-bit ADCs, 14 GPIOs, and SPI (serial peripheral interface) and I2C (inter-integrated circuit) control interfaces, the latter two capable of both master and slave operation. This flexibility means that not only can the ADAU1452 optionally boot from an external serial memory, it can also subsequently initiate boot of (and otherwise access) external SPI-interface peripherals.

The ADAU1452's combination of increased performance and increased integration, according to Gildersleeve, is fueled by automotive audio customers' increased number of per-vehicle audio sources (e.g., microphones, cellphones, music and movie players) and "sinks" (i.e., speaker arrays), along with an increased amount of audio processing (such as beam-forming and other noise reduction techniques, virtual bass boost and surround sound synthesis). Many of these customers, Gildersleeve noted, would otherwise have been forced to design systems containing multiple prior-generation SigmaDSP devices, or to migrate to a more expensive and power-hungry general-purpose DSP approach. To wit, the earlier mentioned ADAU1452 clock speed boost, in combination with the device's enhanced MAC architecture, translates to 6,144 peak SIMD instruction/sample performance at a 48 kHz sampling rate, which equates to the ability (at that same sample rate) to calculate up to 3,000 single- or double-precision bi-quad filter operations per sample, or up to 24,000 FIR taps per sample.

The ADAU1452 expands this fixed-format support to a full 32 bits, in "8.24" format, delivering greater than 42 dB of headroom. And the optional double-precision MAC capabilities have similarly been increased, from 56 bits to 64 bits. Befitting the larger data sample sizes handled by the ADAU1452, its integrated parameter-plus-data RAM array is now 1.28 Mbits in size, able to hold up to 40k 32-bit data words. The size of the ADAU1452's on-chip program memory is 8k words.

Analog Devices has also added many new hardware acceleration blocks to the ADAU1452, including those supporting:

The ADAU1452 has been in production since late last year and is qualified across the full -40C to 85C automotive operating temperature range; a $249 evaluation board is also available (Figure 6). 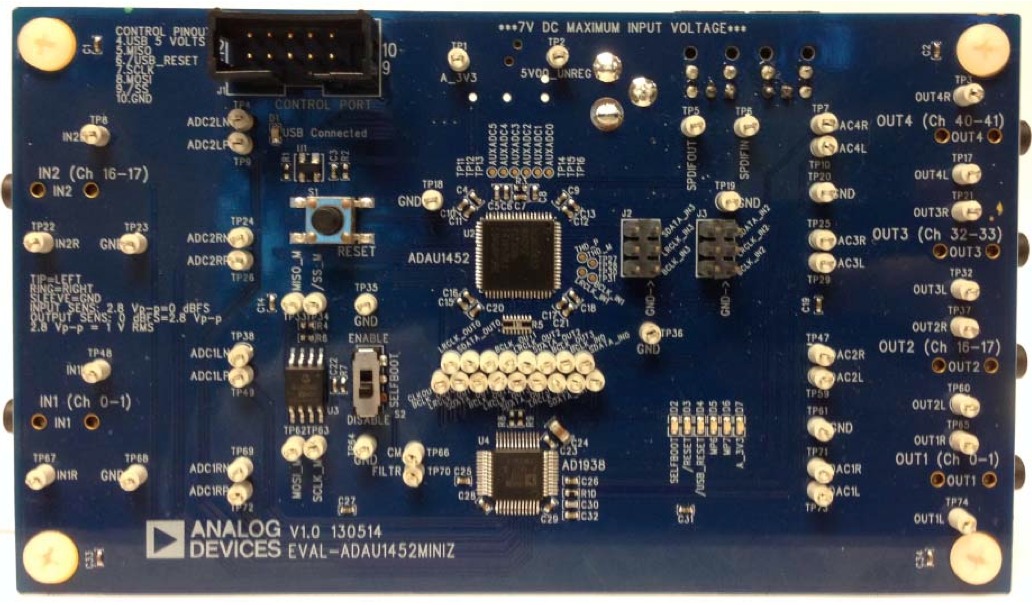 Figure 6. The EVAL-ADAU1452MINIZ evaluation board comes with a USB communications adapter and cable, as well as a power supply, and costs $249.

SigmaDSP is, in many respects, the "last man standing" when it comes to an audio application- and cost-focused digital signal processing platform, admits Gildersleeve. He also states that many historical customers have migrated to general-purpose DSPs, and historical competitors such as Texas Instruments (with its TAS line) and Cirrus Logic have consequently ceased new product development. However, Analog Devices believes there's still a sufficient market opportunity, especially in the automotive sector, to justify at least one more generation of offerings. And considering the performance and feature set upgrades the ADAU1452 provides, those remaining customers' evolutionary needs should be well served by fourth-generation SigmaDSP devices.