BDTI is well known for its software-related capabilities: performance- and power consumption-related benchmarking, for example, along with algorithm evaluation, and development and optimization work. But the company is no stranger to hardware, either. Take, for example, its recent testing of DSP functions implemented in Altera FPGAs, or its successful effort to quantify the power draw of audio processing algorithms running on tablet computers. Or take this month's case study, which stems from a project first discussed in the April 2012 edition of InsideDSP.

That earlier case study detailed BDTI's partnership with Analog Devices, which had just announced four new Blackfin SoCs. Two of the four members of the BF60x family embed a specialized processing core called the PVP (pipelined video processor), tailored for automotive driver assistance and other embedded vision applications. And to showcase the chip’s capabilities in an attention-getting manner, BDTI and Analog Devices came up with the idea of a dice-counting demonstration. A video camera, connected to a first-generation BF60x evaluation board, captures images of dice tossed below it. The PVP, in combination with the Blackfin DSP cores, discerns the displayed value of each die face, and then sums the individual values into a total, which is displayed on a video monitor alongside a picture of the splayed dice.

This first-generation evaluation board offered no shortage of connectivity options and other capabilities, but the features came with associated costs that made the price too high for some customers. So Analog Devices partnered with Avnet Electronics Marketing to develop a feature-optimized, lower-cost second-generation evaluation board that carries a price tag of $299, with a $199 promotional price for the first 500 boards sold (Figure 1). 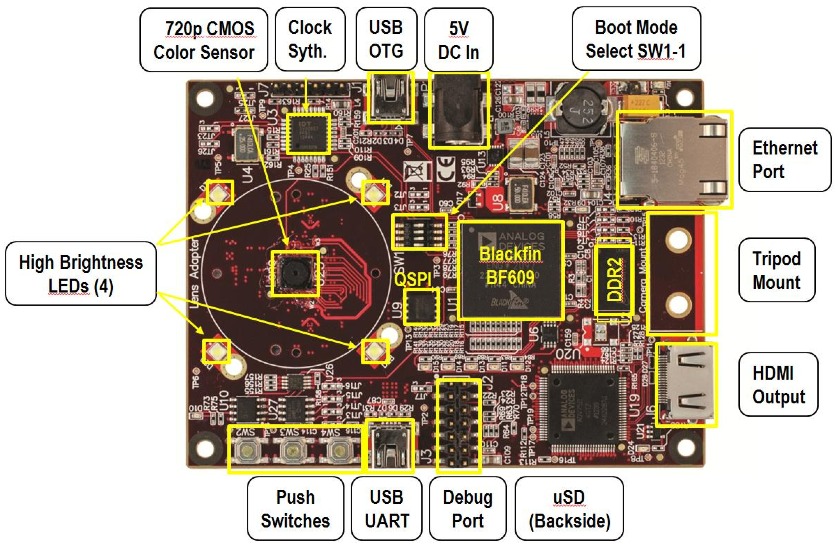 BDTI's primary initial responsibility on the Blackfin BF609 Embedded Vision Starter Kit project (FinBoard, for short) was to adapt the existing dice-counting algorithm to the new hardware, where it is included in both executable and documented source code forms. BDTI's involvement, however, ended up being more extensive, with a notable hardware emphasis.

At the early stages of FinBoard's development, for example, Analog Devices and Avnet had tentatively selected an Aptina MT9M114 HD 720p CMOS Color Image Sensor camera module, but publicly available information on the product was insufficient to enable a full evaluation of its applicability for the design. BDTI's engineers performed experiments to confirm that the MT9M114 was indeed a perfect FinBoard fit.

With the camera module selected, the attention then turned to its illumination source. Embedded vision processing success is highly dependent on how well the subjects being analyzed are illuminated (intensity, uniformity, color temperature, etc.). Had a light source not been provided with the Blackfin BF609 Embedded Vision Starter Kit, the results of using the kit would have been dependent on users’ ambient illumination. And if an external illumination source were included with the board, the burden of correctly setting it up would have fallen on the user. Since the camera module was mounted on the board, BDTI's engineers instead came up with the idea of using four LEDs, one mounted in each corner of (and a short distance from) the camera module, as a means of uniformly illuminating the target with a known-adequate amount of light. 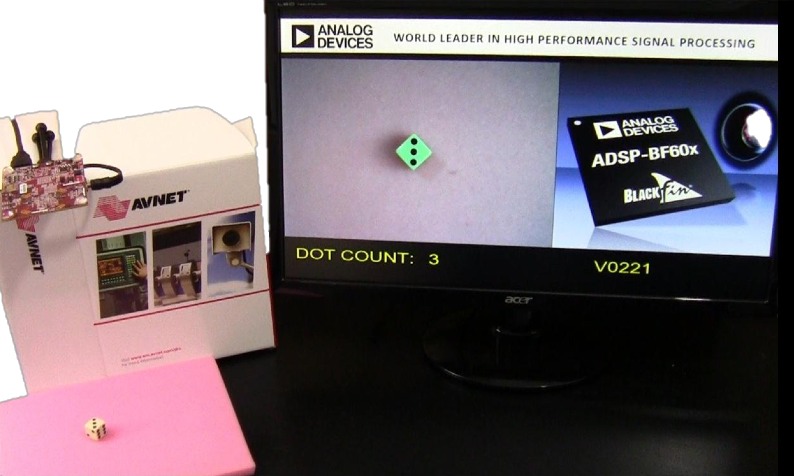 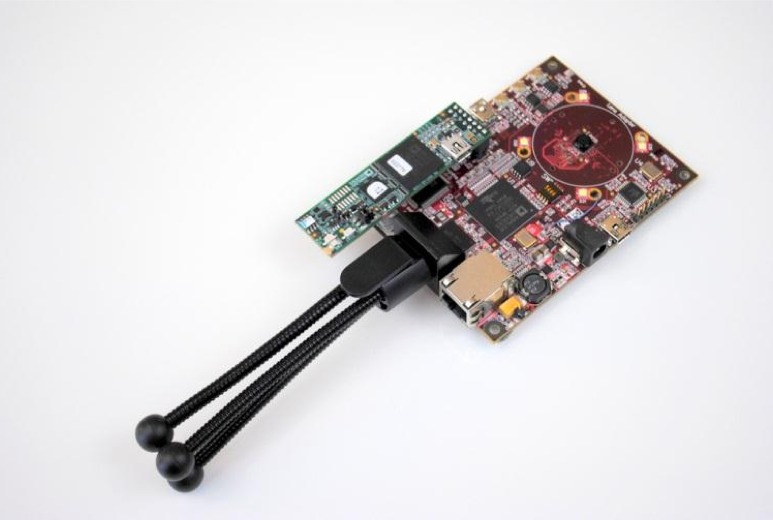 Figure 3. A mounting site integrated on the evaluation board combines with a tripod also included in the Embedded Vision Starter Kit to enable sturdy FinBoard positioning in various positions.

If you'd like to leverage BDTI's extensive hardware expertise in your next project, contact Jeremy Giddings at +1 925-954-1411 or giddings@BDTI.com.