Microchip Technology's GestIC: An E-Field Based Competitor (or Companion) to Camera-Based Gesture Technology

Touch-free gesture interfaces are increasingly entering the public consciousness, spurred on by trendsetting popular implementations such as Microsoft's Kinect. And, as Tom Cruise's portrayal of Chief John Anderton in the future-forecasting film Minority Report suggests, they're equally compelling beyond the game console. Camera (i.e. image sensor)-based gesture interface implementations may be most common nowadays, but they're not the only feasible approach.

Several weeks ago, for example, Elliptic Labs unveiled a Windows 8 (64-bit)-based reference application suite and SDK for the company's ultrasonic gesture technology. Per the company's website documentation, the Windows 8 Gesture Suite supports functions such as select, scroll, rotate, menu drop-down and trajectory control. It's implemented using an array of eight microphones and two to six speakers, with a 40 KHz center operating frequency and a 96 KHz microphone sampling rate. It's reminiscent of, although a more elaborate implementation of, a single speaker-plus-microphone concept called SoundWave, co-developed by Microsoft Research and the University of Washington.

Or consider the primary topic of this article, Microchip Technology's GestIC technology, obtained via the company's acquisition of Ident Technology earlier this year, and which recently yielded its first product implementation in the form of the MGC3130 controller IC. So-called "proximity" capacitive sensing has been around for several years, and is promoted by multiple suppliers. Given a sufficiently sensitive analog sensor element or array, along with a sufficiently robust digital processing algorithm to extract the signal from background noise, it's possible to sense not just the capacitance change resulting from a finger or other conductive item placed in contact with the sensor, but also from one nearby it.

To date, proximity sensing has been relatively crude in its capabilities.  As a result, it’s been used for simple tasks, such as (for example) bringing other system circuitry out of deep sleep as a finger nears the sensor, in preparation for a response to a subsequent true touch event. Microchip's GestIC substantially raises the functional bar. With GestIC, the E-field is generated by a multi-layer conductor "sandwich" of transmit and receive structures, separated by an insulator layer (Figure 1). 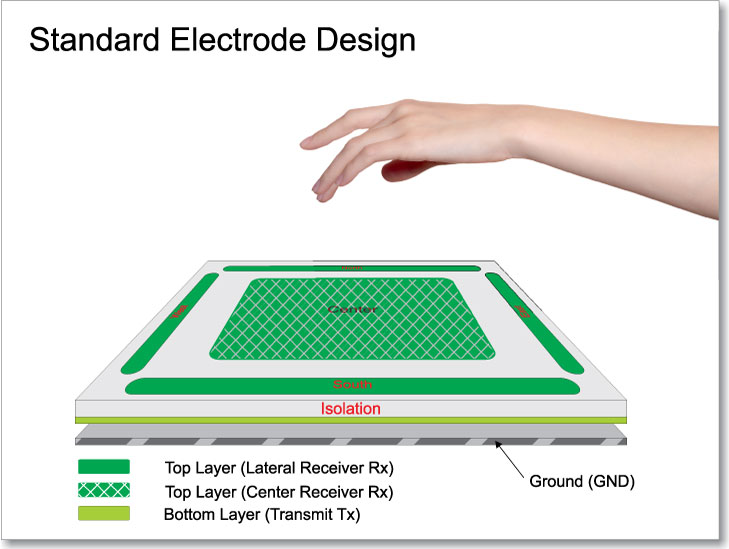 The conductive traces, which can either be dedicated-function or alternatively can be also used by a separate capacitive touch controller (albeit not at the same time), by default create a series of symmetrical equipotential lines (Figure 2). 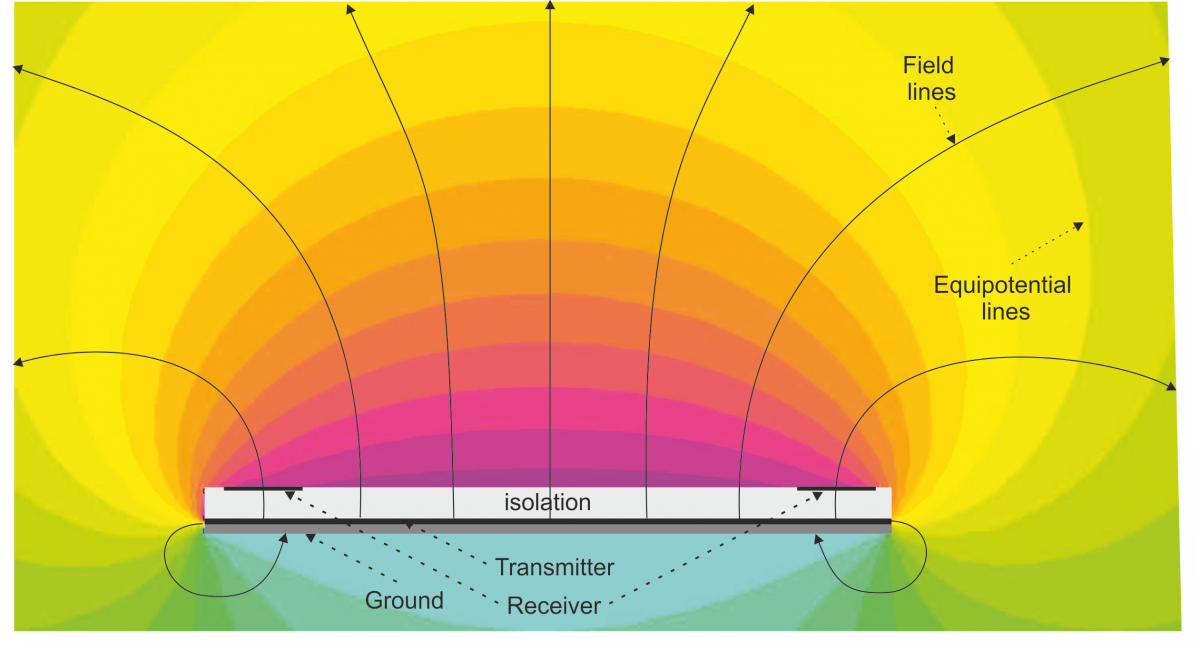 An E-field is generated by electrical charges and spread three-dimensionally around the surface carrying the electrical charge. Applying direct voltages (DC) to an electrode results in a constant electric field. Applying alternating voltages (AC) makes the charges and, thus, the field, vary over time. When the charge varies sinusoidal with frequency f, the resulting electro-magnetic wave is characterized by wavelength λ = c/f, where c is the wave propagation velocity (in vacuum, the speed of light).

GestIC technology uses transmit (Tx) frequencies f in the range of 100 kHz, which reflects a wavelength of about three (3) kilometers. With electrode geometries of typically less than twenty (20) by twenty (20) centimeters, this λTx wavelength is much larger in comparison. Therefore, the magnetic component is practically zero and no wave propagation takes place. The result is a quasi-static electrical near field that can be used for sensing conductive objects such as the human body.

A close-proximity finger or other conductive element distorts these equipotential E-field lines in a manner that the MGC3130 controller can detect and appropriately respond to. Again quoting from Microchip's website:

The field lines intercepted by the hand are shunted to ground through the conductivity of the human body itself. The simulation results show the influence of an earth grounded body to the electric field. As illustrated (Figure 3), the proximity of the body causes a compression of the equipotential lines and shifts the receiver (Rx) electrode signal levels to a lower potential which is detected by the respective GestIC technology product. 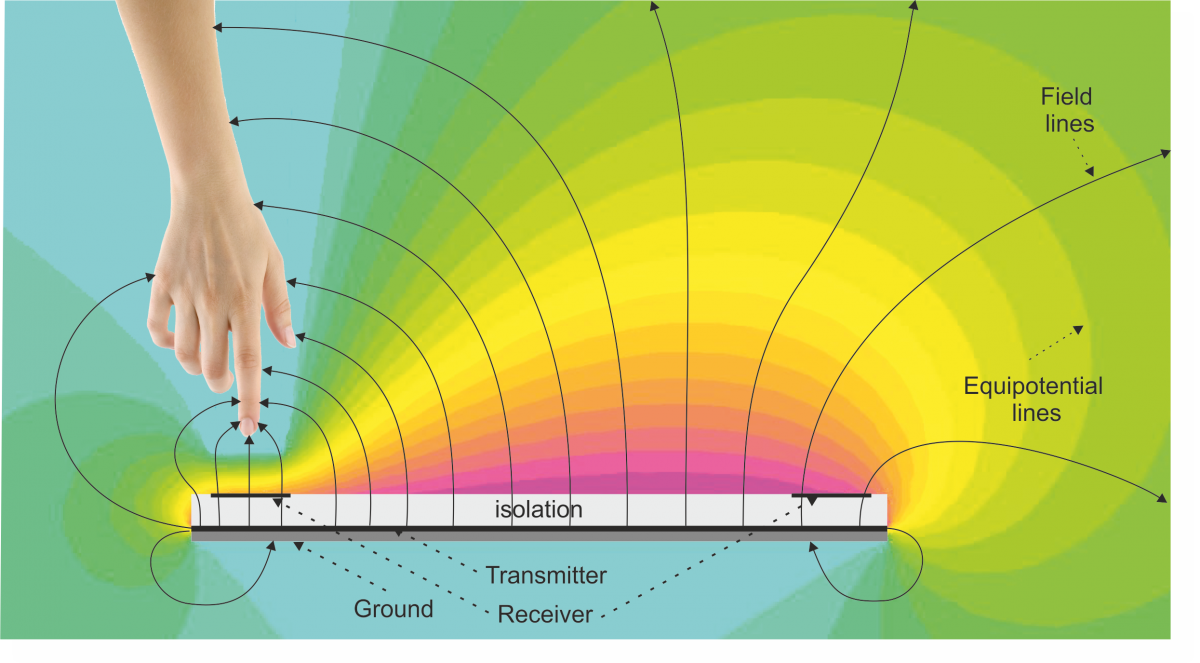 Figure 3. A close-range conductive item, such as a human finger, distorts the E-field in a manner that the MGC3130 can detect and decode.

Microchip claims that GestIC technology has a detection range of up to 15 cm (~6 inches), with a 200 Hz data sampling rate that translates into laser mouse-like 150 dpi horizontal and vertical resolution capabilities. The MGC3130 leverages frequency-hopping techniques within a range from 70 to 130 kHz to dodge the effects of interference from sources such as lighting fixtures.

And perhaps not surprisingly, the IC's foundation is a dedicated-function 32-bit DSP, with microcode in 32 KBytes of field-upgradeable flash memory and 12 KBytes of SRAM. Microchip brands its embedded algorithms as the Colibri Suite; they use a Hidden Markov model in conjunction with x/y/z hand-position vectors to implement tracking, flick, circle and symbol gestures. Surrounding the DSP core are analog-conversion (5 transmitter, 1 receiver) and application processor-interface function blocks (Figure 4). 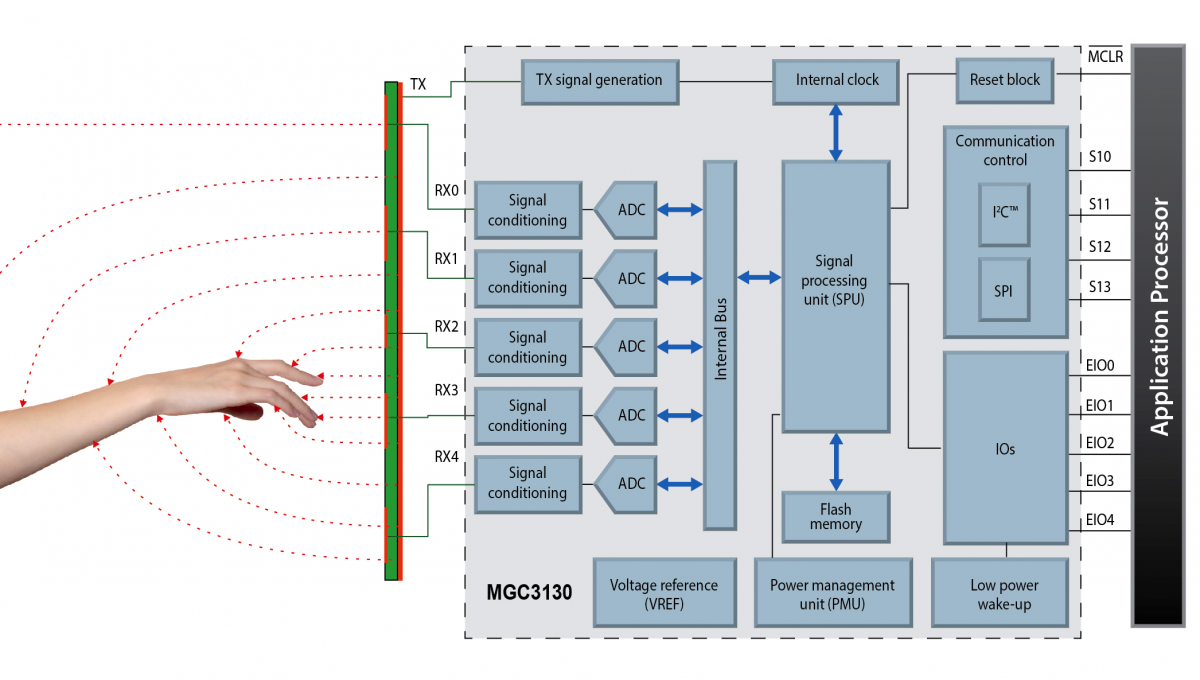 Figure 4. At the heart of Microchip's first E-field controller, the MGC3130, is a 32-bit DSP driven by dedicated-function, field-upgradeable firmware.

Although the MGC3130 is not capable of implementing conventional capacitive touch algorithms, Microchip's long-term product plans include merging of E-field and touch functions within a common controller. The MGC3130 is currently sampling, with production slated to begin by the end of this month and full production by April, priced at $2.26 in "high volume." Also available is the $169 Sabrewing Single-Zone Evaluation Board kit, containing the MGC3130 and both 5" and 7" diagonal sets of selectable frame electrodes, plus Windows-based AUREA reference software. The MGC3130 comes in a 5x5mm 28-pin QFN package.

So how does GestIC's E-field technology stack up against an image sensor-based gesture interface scheme? Microchip touts, for one thing, the MGC3130's low power consumption at 3.3V: 9 µA in deep sleep mode, 45 µA in self-wakeup standby mode, and 30 mA in full operational mode. Compare this to the power draw of a processor used to implement a robust vision-based gesture interface algorithm, not to mention that of the image sensor, external memory and other required circuitry.

Company representatives also point out that over the distances at which the MGC3130 operates, an E-field approach isn't prone to the "blind spots" which a camera-based design can exhibit. On the other hand, GestIC won't operate beyond a half-foot span, and the Microchip spokesperson also acknowledged that vision-based implementations are capable of supporting more complex gesture sequences. Your particular design criteria, therefore, will determine which of the two approaches is optimal. In fact, you might end up combining them, if your application requires gesture interface support across a wide distance range.