In the digital audio world, the second half of the '90s and a notable portion of the '00s were dominated by the "codec wars." Kicked off by MP3, which emerged in mid-1994, the battle was soon joined by a host of competitors; industry-standard follow-on AAC, Microsoft-developed WMA, RealNetworks-championed RealAudio, open-source favorite Ogg Vorbis, etc. And, from a surround sound standpoint, Dolby Digital was dominant in the DVD era, with DTS ascendant on the Blu-ray successor.

Nowadays, however, the codec wars have largely diminished to sporadic skirmishes. For conventional two-channel audio, MP3 remains the status quo, thanks in no small part to the record labels' abandonment of DRM. AAC has secondary priority, courtesy of iTunes. And the Dolby-vs-DTS tug-of-war has degraded to a stalemate, although their shared optical disc business basis is flirting with obsolescence, courtesy of growing popularity of streaming video.

Does this market maturation mean that audio DSPs are in danger of irrelevance? Not according to Tensilica, which chose last week's Consumer Electronics Show to unveil the company's latest HiFi 3 audio DSP core. In focusing on consumer electronics applications such as TVs and optical disc players, as well as mobile electronics opportunities such as cellular handsets, company spokesperson Larry Przywara (senior director of multimedia marketing) was quick to comment that codecs remain a corporate priority: not only the earlier-mentioned two-channel and multi-channel music schemes, but also a diversity of voice-optimized cellular and VoIP approaches.

Przywara made a point of noting, for example, that one notable ongoing codec opportunity is due to the prevalence of consumers ripping DTS-HD Master Audio-encoded Blu-ray discs to DRM-stripped files for subsequent playback over tablets and smartphones, HDMI-tethered to TVs. However, the dominant upside implementation opportunity this time around is post-processing; surround sound virtualization and expansion (Qsound, SRS Labs, etc.), speaker calibration (Audyssey), dialog normalization, dialog clarity and boost, bass and treble boost, equalization, etc.

That's where HiFi 3 comes in. Przywara noted that the company's latest generation DSP core didn't explicitly come about due to the higher transistor counts available in latest-generation processes, suggesting instead that its development was fueled by the higher processing requirements of latest-generation systems. Nonetheless, he agreed that 28 nm and smaller lithographies made advanced cores such as HiFi 3 far more cost-effective than might have been possible in the past (Figure 1). 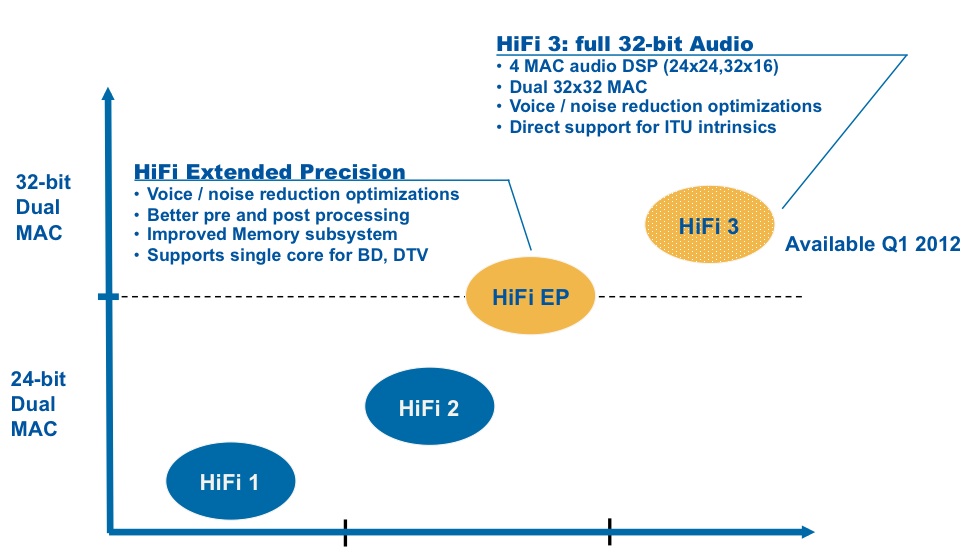 HiFi is a three-slot (i.e. triple-issue) VLIW architecture based on the company's Xtensa Dataplane Processor (DPU) approach and encompassing a multi-MAC scheme capable of quad 24x24 or 32x16, or dual 32x32 or 32x24 MAC operations. HiFi 3 also integrates a 64-bit load/store unit, along with a unified 16-entry, 64-bit register file. Backwards-compatible with HiFi 2 and HiFi EP software, HiFi 3 will at minimum offer a modest performance boost for legacy code; a sub-10% average improvement "out of box" with a greater-than-20% average improvement after various coding tweaks, according to Tensilica.

And the improvements aren't restricted to synthetic code samples; according to Tensilica, they also extend to production audio algorithms, where the resultant lower processing load translates into reduced clock speed (therefore extending battery life) or into performance headroom available for other functions (Figure 3). 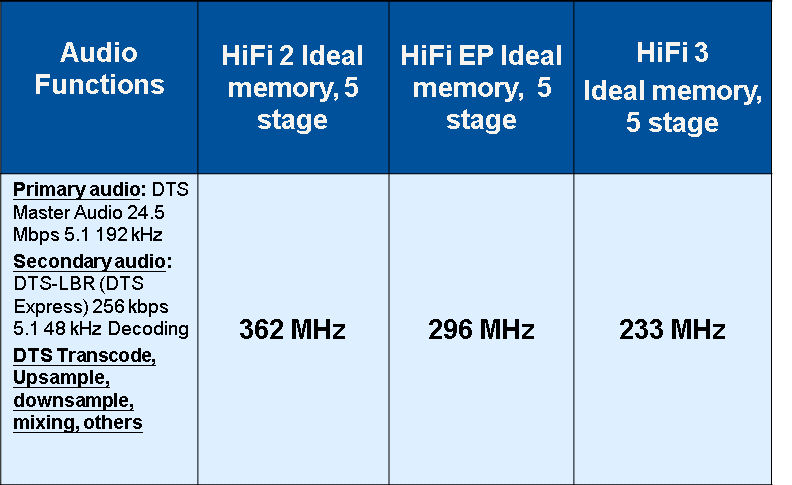 HiFi 3's software tools (including both a compiler and a cycle-accurate simulator) are now available to lead customers, as is access to beta core RTL (register transfer level) code. To wit, Tensilica says that it has already licensed HiFi 3 to a tier-one smartphone OEM and a tier-one semiconductor manufacturer, though it declines to disclose the identities of these customers. The general HiFi3 release is forecasted to occur by the end of this quarter.