Texas Instruments (TI) has announced four new ARM-based processors under the Sitara and Integra brand names. These processors are part of a pin- and software-compatible family that offers optional DSP and graphics accelerators to address applications with a wide range of performance requirements.

Two of the new processors are additions to the existing Sitara family, while two carry the new Integra brand name. The latest Sitara processors—the AM3892 and AM3894—feature an ARM Cortex-A8 core that operates at speeds up to 1.5 GHz. Both chips integrate a display engine while the latter also includes the SGX530 3-d graphics accelerator core from Imagination Technologies. The two Integra family processors—the C6A8167 and C6A8168—combine a Cortex-A8 core with a TMS320C674x floating-point DSP core, both of which can operate at speeds up to 1.5 GHz. The Integra chips both integrate a display engine; the latter includes the SGX530 3-d accelerator. All of the chips include the same set of peripherals, including dual gigabit Ethernet MACs, PCI Express (PCIe) Gen2, SATA 2.0, and a DDR2/DDR3 memory controller. Figure 1 depicts the C6A8168. 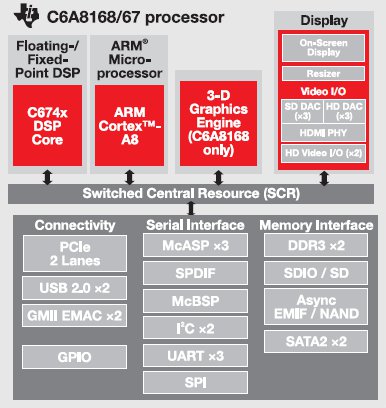 TI is manufacturing the chips in a 40 nm process. TI expects power consumption for the new chips to be in the 5-7 watt range, with DSP-inclusive Integra processors falling at the high end of this range. TI is now sampling the processors with prices ranging from $43 to $49 (quantity 1,000)—a fairly narrow price range, given the concept of a scalable family that TI is pitching.

Floating-point support is a key thread that runs through the two product lines. The Cortex-A8 cores include ARM’s NEON block that adds fixed- and floating-point SIMD operations, enabling higher throughput on data-parallel operations compared to what the base Cortex-A8 core can handle. And TI decided to integrate a floating-point DSP core into the Integra chips, rather than a fixed-point core as found in many of TI’s older ARM-plus-DSP offerings. BDTI has noted recently that design teams increasingly choose floating-point-capable processors for DSP applications. Floating-point support simplifies and accelerates the development process, relieving the software developer of the complicated task of scaling and shifting values properly to manage numeric range and precision.

TI believes that floating-point support is especially important for many designers who use high-level tools to prototype applications. Those tools generally rely on floating-point arithmetic; moving the code generated by such tools to a floating-point embedded processor is much simpler than moving it to a fixed-point processor. Sitara and Integra allow a design team to utilize floating-point code whether the application runs entirely on the ARM or uses the DSP core to handle compute-intensive routines.

TI suggests that Sitara parts are suitable for applications including single-board computers and modules, network-centric devices such as routers, industrial applications, and point-of-sale terminals. Integra will enable more complex applications. For instance, an industrial application that requires vision inspection might use Integra rather than Sitara. Integra might also find application in medical imaging, avionics, and test and measurement, according to TI.

TI has published some performance comparisons to help designers select between Sitara and Integra parts. The company compared the NEON-enabled Cortex-A8 and the DSP core executing functions from the OpenCV (open source computer vision) library. Figure 2 depicts execution time relative to image size for two common functions. Clearly as image size grows, the value of the DSP core does as well.

TI offers a single development board that design teams can use to jump-start application development regardless of which of the four new processors is ultimately chosen for an application. The board is based on the Integra C6A8168 processor with the integrated DSP and graphics accelerator. Designers planning to use a chip without the DSP or without the graphics accelerator can develop their applications without using those features in the C6A8168. The board is available now for $1,895 and includes a processor, touch-enabled LCD, and Linux development tools.

The development board includes TI’s EX Software Development Kit including the C6EZRun tool that allows developers with little DSP experience to compile code for the DSP, and the C6EXAccel DSP software library. Developers can use those TI tools for free alongside Linux development tools. Optionally, design teams can purchase the TI Code Composer Studio to use in the development process.

TI has had prior success integrating ARM and DSP cores, although that success has come primarily in targeted high-volume applications such as handsets and multimedia devices. The company seems to be targeting a much broader range of applications with Integra and Sitara. As TI targets a broader range of applications, the chips inevitably will find use by design teams that don’t have deep DSP experience. The success of the product line may therefore be largely determined by how well the development tools work and whether engineers without DSP experience can quickly become proficient using them.