This spring, ARM added the Cortex-M4 digital signal controller (DSC) to its processor core line-up.  This product brings digital signal processing capabilities to ARM’s microcontroller core line (the Cortex-M family).  At the Embedded Systems Conference in San Jose in April, NXP demonstrated a prototype Cortex-M4-based chip running at approximately 150 MHz.  In June, Freescale announced its Kinetis line, also based on the Cortex-M4.  ST Micro and Texas Instruments have also announced their intentions to use the Cortex-M4. 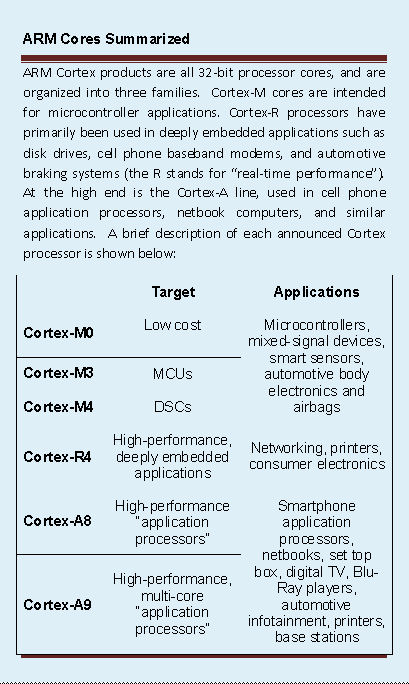 Among the new DSP-oriented features in the Cortex-M4 architecture are 8- and 16-bit single-instruction, multiple-data (SIMD) operations.  Also notable are single-cycle multiply-accumulate instructions supporting up to 32-bit x 32-bit multiplication with 64-bit accumulation.  These instructions are a subset of ARM’s NEON instruction set.  Since DSC speeds are limited to around 150 MHz due to flash memory speeds, ARM optimized the core for low area and power consumption rather than speed.  According to ARM, in a 65 nm process the Cortex-M4 occupies 65K gates and consumes less than 40 uW/MHz.

Along with the Cortex-M4, ARM announced a hardware abstraction layer dubbed the “Cortex Microcontroller Software Interface Standard (CMSIS).”  This framework defines software abstractions (APIs) that include standard interfaces to timers, microcontroller registers, and interrupt controllers.  They are intended to assist developers in creating device drivers that are more portable between chips.  In addition, ARM says it will release details of math libraries for the Cortex-M4 later this year.

The fact that four major chip companies have already lined up behind ARM Cortex-M4 indicates the importance attached to digital signal processing in micro controller applications.  It is also interesting to note that each of the these chip suppliers has one or more legacy processor product lines with capabilities overlapping those of the Cortex-M4.  Will the new Cortex-M4-based chips become successors to venerable embedded processor families such as Freescale’s ColdFire®?  If so, they could have a huge impact on the industry.